To come up with an unambiguous definition of one of the most fascinating personalities in the history of rock is a daunting task, if not a utopian enterprise. It is a realization of this fact that provides the starting point for the exhibition David Bowie Is, now at the MAMbo in Bologna (until November 13), on the ninth stage of the tour that commenced at the Victoria & Albert Museum in London. So the title should be understood as an enormous question with no answer, as any response would be right and at the same time wrong: each of Bowie’s masks represents just one, tiny bit of his art. The exhibition, curated by Victoria Broackes and Geoffrey Marsh, retraces the singer’s career in chronological order, lingering over the celebrated metamorphoses of the seventies and early eighties. The dance opens with a detailed account of his origins: his childhood in Brixton, the dustups at school (including the one that resulted in permanent damage to the pupil of his left eye), Beat literature and jazz music (to which he was introduced by his brother Terry), his love of the saxophone, the band he formed with his friends. His debut as a soloist was a flop: between 1965 and 1967 the young David was still a hybrid figure, halfway between the rebellious mod and the folk minstrel, too confused an identity to grab the attention of the public. The turning point came with the single Space Oddity, whose release coincided with the landing on the moon, becoming its soundtrack. Next comes the presentation of his most famous alter ego: Ziggy Stardust. The recording of his first appearance on the program Top of the Pops is screened in one room. This was in 1972 and Bowie sang Starman, accompanied by his Spiders from Mars: that guitar intro and that first line (“Didn’t know what time it was and the lights were low”) gained him an entrée to the exclusive circle of pop stars. This is followed by the other stand-ins of the White Duke, all documented by images, film strips and audio tracks: the alien figure portrayed on the cover of the Aladdin Sane album, the drawings of the dystopian city imagined as the setting for Diamond Dogs, the handwritten lyrics of the songs on Young Americans, the teaspoon David used to sniff cocaine. Fragments of life and music that permit a total immersion in the artist’s stroboscopic world. The chronological order is interrupted by an overview of his collaborations with fashion, graphic and set designers and with musicians. Here some of the spectacular costumes worn by the singer are presented, like the skittle-suit inspired by Sonia Delaunay, the space bodysuits of Kansai Yamamoto and the coat made by Alexander McQueen for the cover of the Earthling album. Particular attention is paid to his fascination with mime and the theater, something that runs through every stage of his career, both in music and in filmmaking. Continuing with the story, we come to the prolific Berlin period. Bucking the trend of growing drug use in the West Berlin of the late seventies, Bowie chose to move to the German city to get way from the excesses of Los Angeles, initiating a physical as well as artistic rebirth. These were the years he spent with Iggy Pop, between parties, romps and solitary bicycle trips. The exhibition closes with a room devoted to his live performances, where clips from some of his concerts are shown on screens while the walls are covered holding the singer’s costumes. David Bowie Is offers a celebration of the genius, inspiration and charisma of this pop icon that is not to be missed, and bears witness to a piece of rock history the like of which we are unlikely to ever see again. 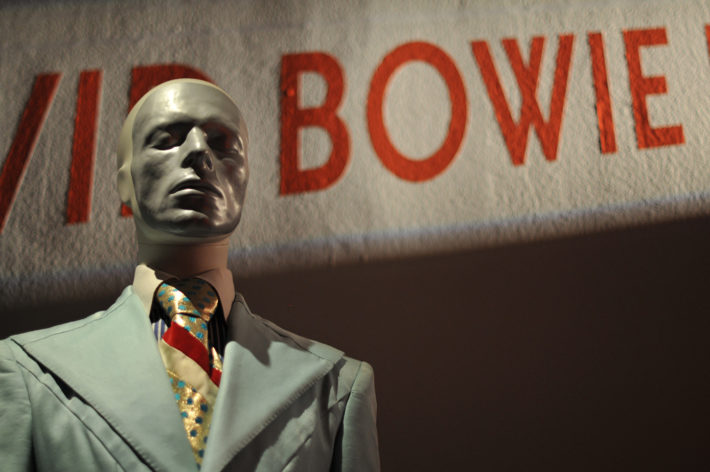 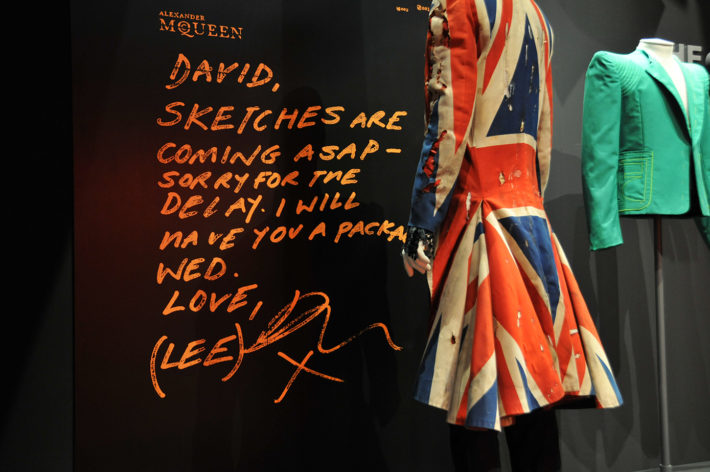 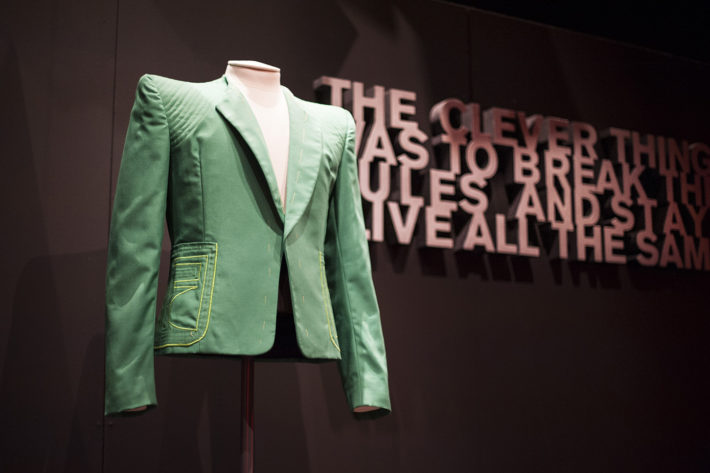 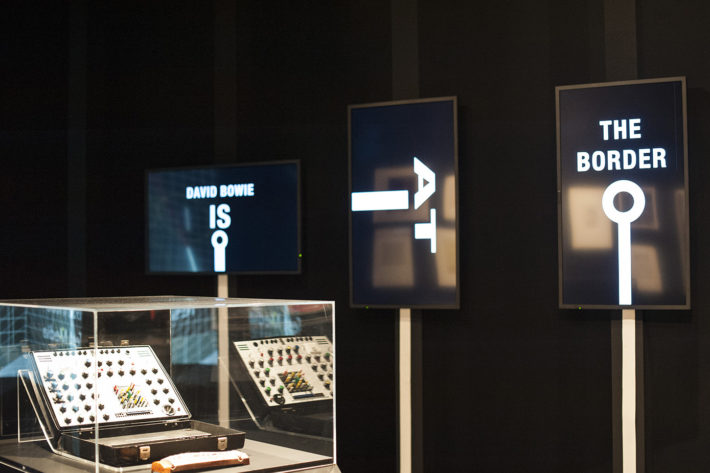 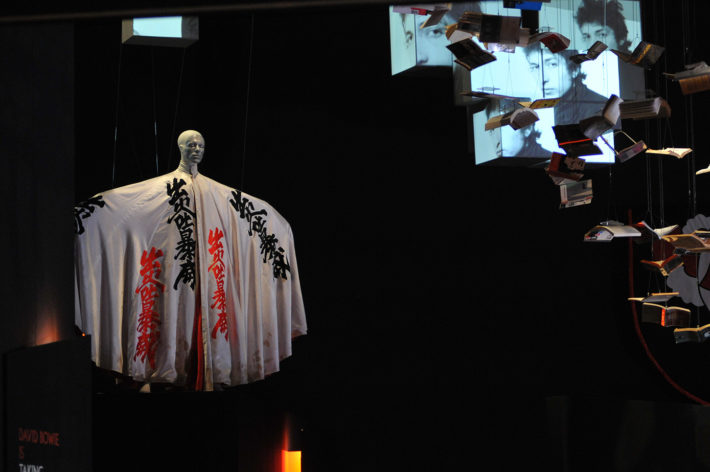 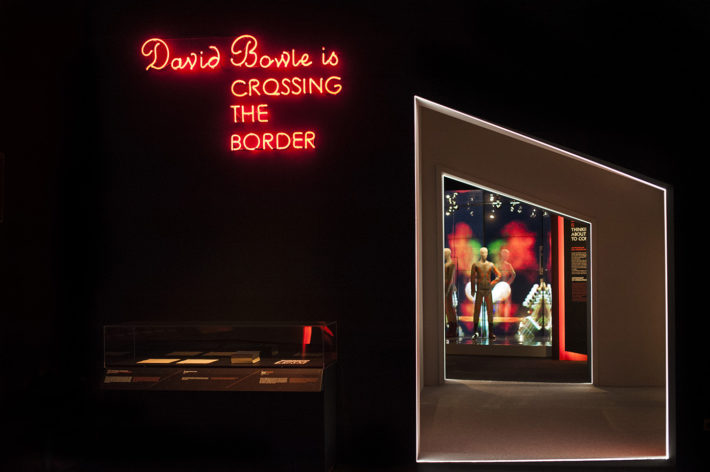 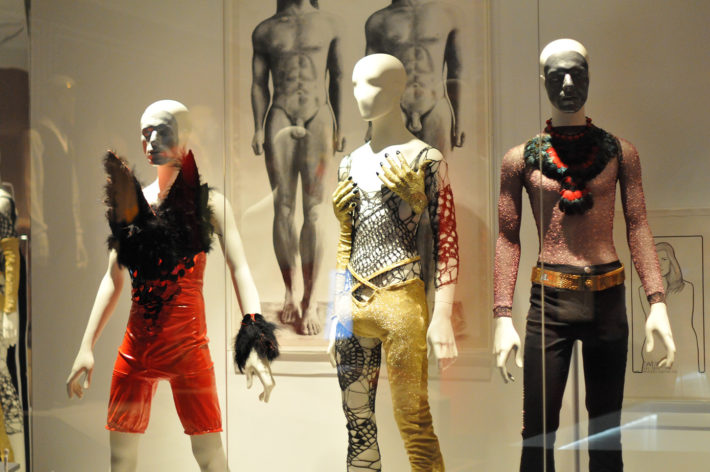 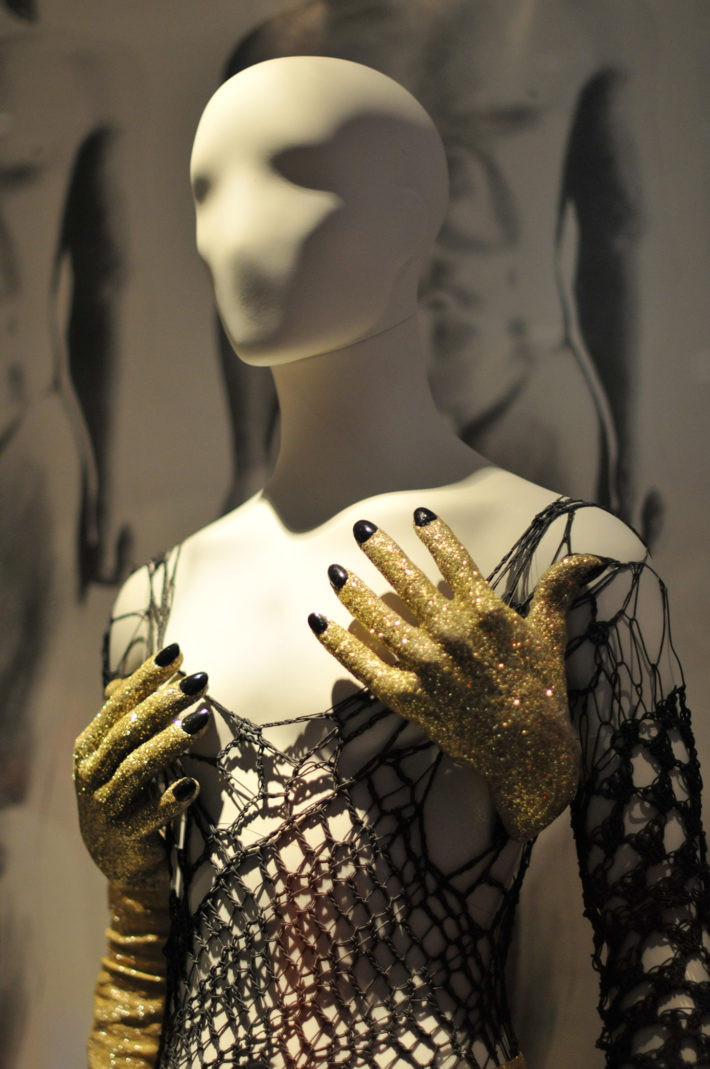 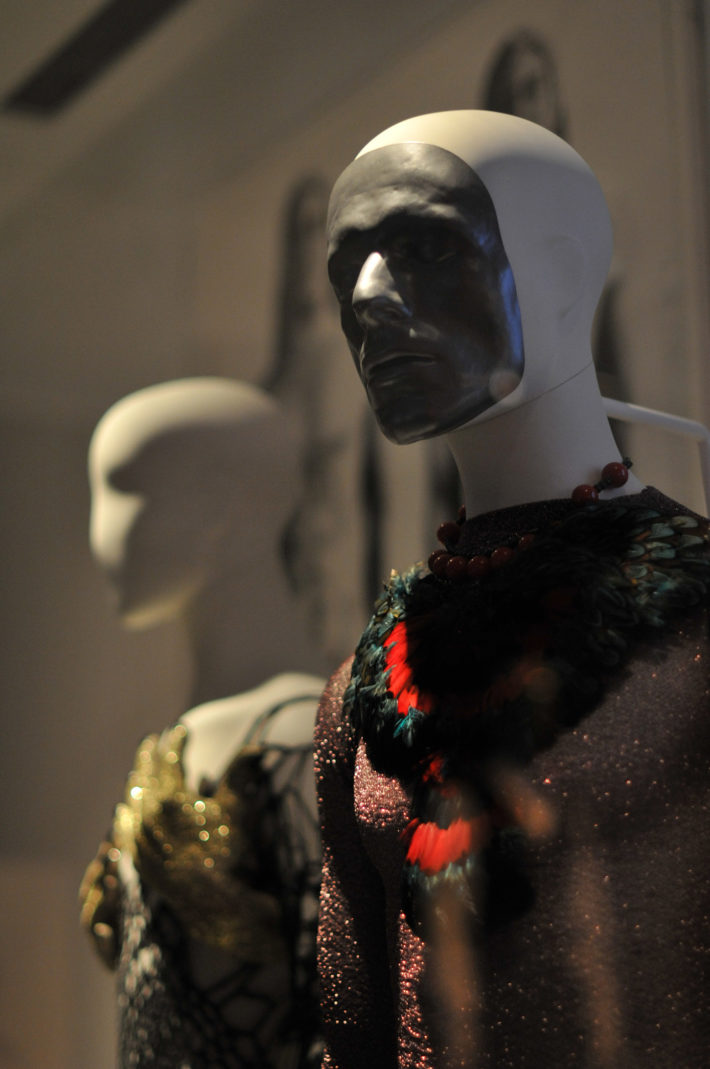 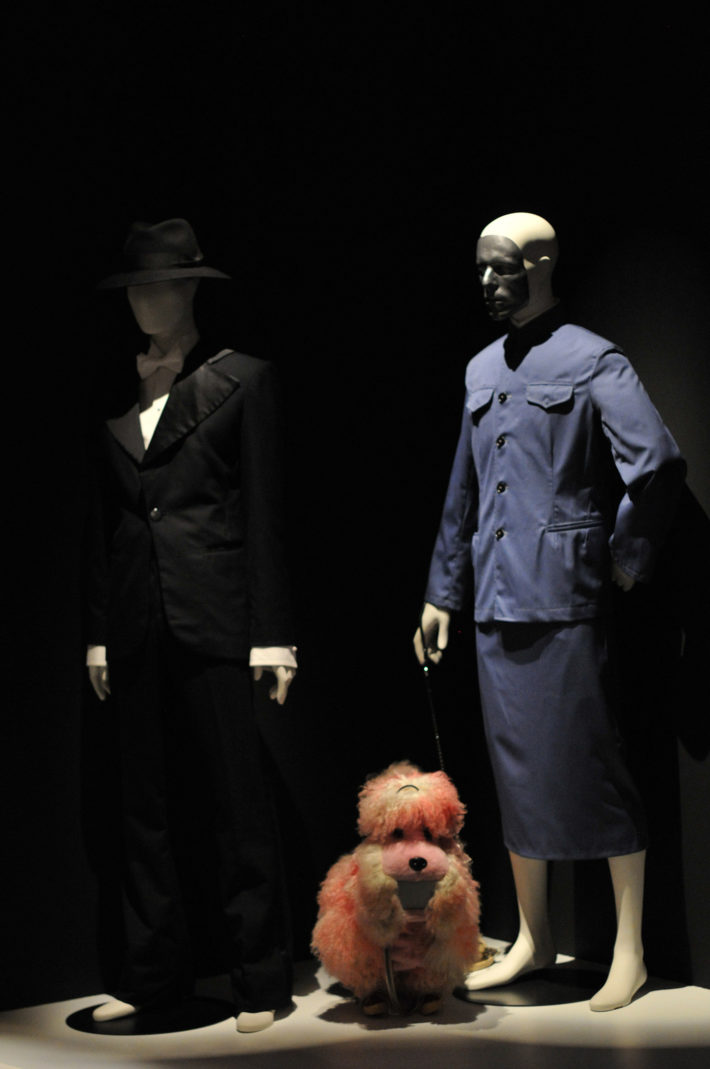 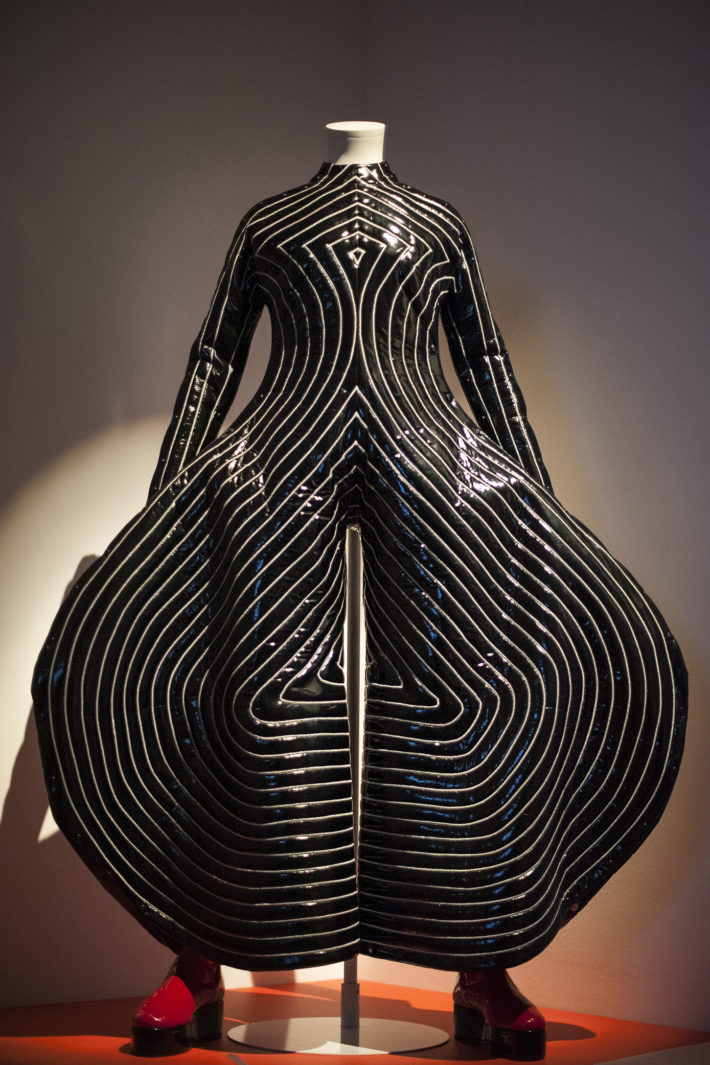 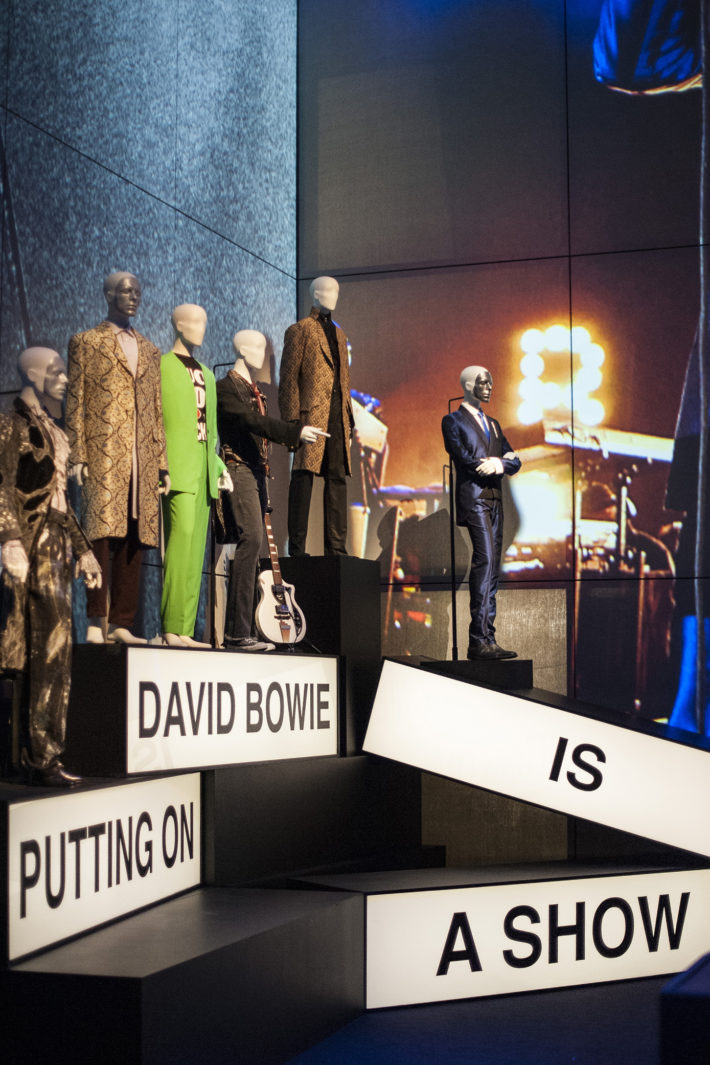