Ever since the early 1940s, dramatic years of war and hunger, Eduardo Paolozzi had been collecting pages torn out of the magazines that were read by American GIs stationed in Britain. The generation of artists to which he would belong, together with Richard Hamilton, Peter Blake and David Hockney, would use the cuttings from those magazines to give voice to a true change of cultural paradigm: the Britain that had emerged from postwar poverty and embraced the consumerism of the United States. Borrowing images, photos and ideas from the colorful world of comic strips, print advertising, science-fiction books and TV celebrities, Paolozzi mixed together more or less conventional materials to democratize art and abolish the distinction—which in Britain was almost a matter of class—between “highbrow” and “lowbrow” culture: what could this have been, if not the first green shoots of British Pop Art? The second Adam who dominates Hamilton’s collage with a lollipop in his hand, Hockney’s dreamy and ethereal swimming pools: it was clearly a new modern utopia, if a bit schizoid at times, the one in which Paolozzi found himself deeply entangled. But it would be necessary to wait for Albion’s Pop Art to cross the Atlantic for it to be recognized as a true movement. There, awaiting Paolozzi and his ilk, would be Andy Warhol, Roy Lichtenstein, James Rosenquist and Claes Oldenburg: the icons of the new international phenomenon. True giants. But Paolozzi would lead the way. 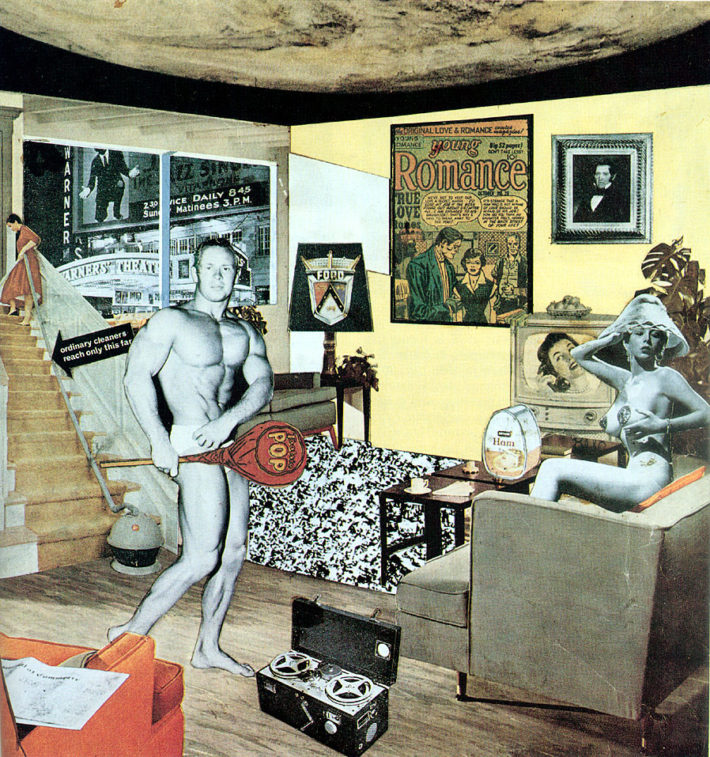 Richard Hamilton, Just what is it that makes today’s homes so different, so appealing?, 1956. Kunsthalle Tübingen, Tübingen.

Lots of Pictures—Lots of Fun is the title of the exhibition that the Berlinische Galerie is staging on the Italo-Scottish artist, who died in 2005 at the age of 81. It is the first to be devoted to him in the German capital for over three decades. The exhibition, which will run till May 28, concentrates on Paolozzi’s experimental research, from the forties to the seventies, bringing his most significant works together from private and public collections all over the world—with one part devoted to the graphic works produced during his extraordinarily productive stay in Berlin. The first section focuses on Paolozzi’s early works, the most prominent of which is I was a Rich Man’s Plaything, a collage he made at the age of 23 and considered a nascent form of Pop Art. The recurrent themes of that period were the use of loud colors and patterns and a fascination with cars, popular culture and absurdity. It is an incredibly varied body of work, ranging from reinforced concrete sculptures of a Brutalist stamp to monochromatic prints and advertising collages for magazines. Like his contemporaries Warhol and Rauschenberg, Eduardo Paolozzi was a multidisciplinary artist. His attempt to break with the past and utilize new materials is the theme of the second section of the exhibition. Here the artist seems to have wished to distance himself from the Pop Art of his youth, whether American or British. How come? Perhaps a return to the origins of the origins: with the intention of recovering not objects promoted by the mass media, but authentic expressions of popular culture. So what predominate in this section are fantasy, narration and humor; and the way in which the figures occupy space seems genuinely rigorous, sincere, less random than usual. 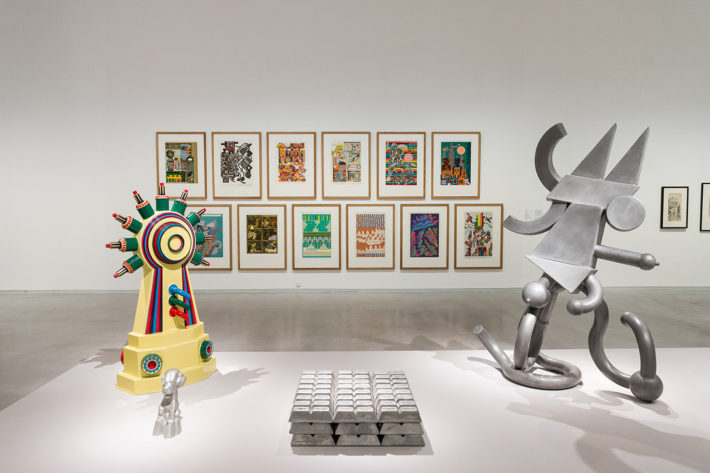 Daniel F. Herrmann, curator of the retrospective that the Whitechapel Gallery devoted to Paolozzi in 2017, explained: “Paolozzi was one of the most diverse, heterogeneous and versatile artists to emerge from post-war Britain. [He] works in different mediums and doesn’t let himself be pinned down to one particular category… He also has a certain uncompromising vision—he’s interested in particular themes and materialities but he doesn’t run after fashion.” Eduardo Paolozzi was born in 1924 in the suburbs of the Scottish capital Edinburgh, the son of Italian immigrants originally from Cassino. In 1940 Italy declared war on Great Britain and the conflict reached right into his home: he and his mother were interned for three months and his father, grandfather and uncle were deported to Canada, but the ship carrying them was torpedoed in the Atlantic by a German submarine and sunk. At the age of 19 he enrolled in the Edinburgh College of Art, but by 1944 he was in London, where he studied for three years before moving to Paris. Returning to London, he started a family. In the fifties he moved to Essex, and later took up a long series of teaching posts in Europe (Cologne, Berlin, Munich) and America (California). In 1968, just 44 years old, he was awarded a CBE by Queen Elizabeth. Fame and recognition had arrived at the prime of his life, and were never to leave him. He, however, continued to describe himself as “an old poor pro,” and would say yes to anything asked of him. Britain, though, took care of him, giving him innumerable commissions (his mosaics in Tottenham Court Road tube station should not be forgotten) and heaping honors on him. When Sir Eduardo Paolozzi died in London many thought that it was partly because he had been worn out by overwork. “Once interned as an enemy alien,” wrote the Guardian at the time, he “later turned the entire country into an open air gallery of his work.” And while Great Britain was his homeland, he had a particularly strong tie of affection with Germany: the six months he spent in Berlin between 1974 and 1975 are considered some of the most important and inspired in his career, and it is to this period that the third and last part of the exhibition is devoted. 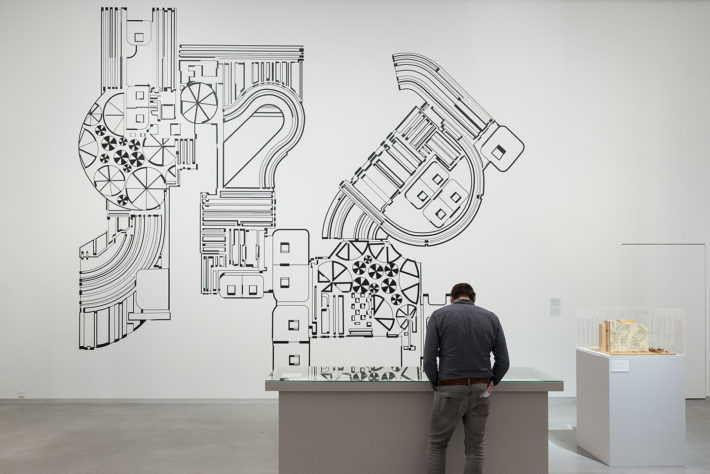 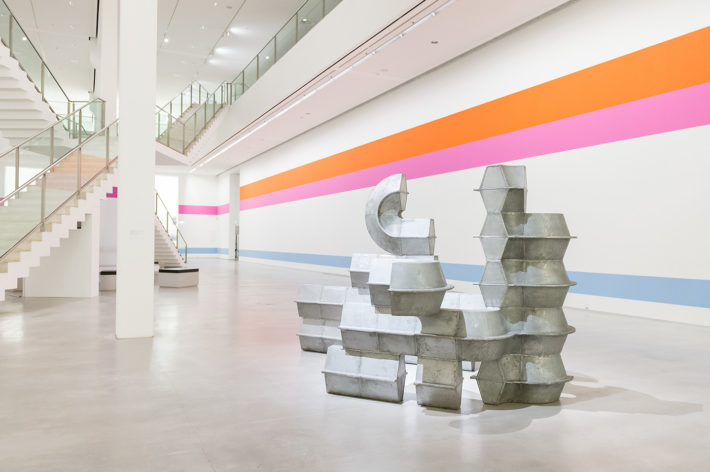 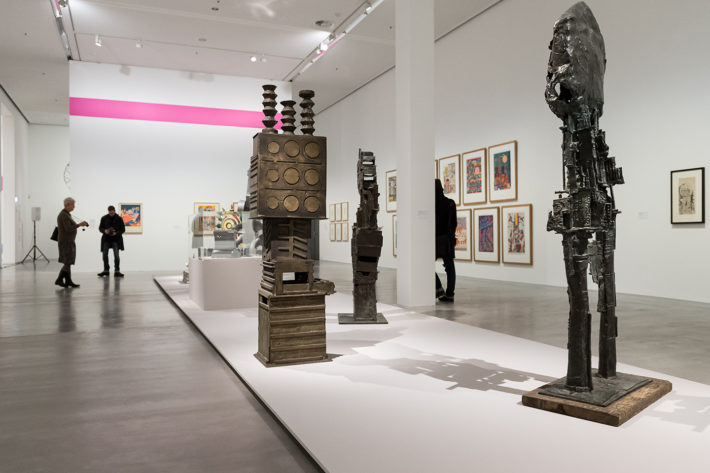 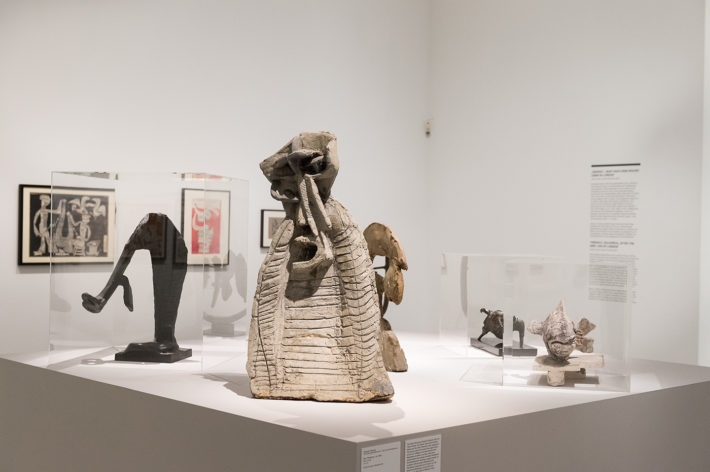 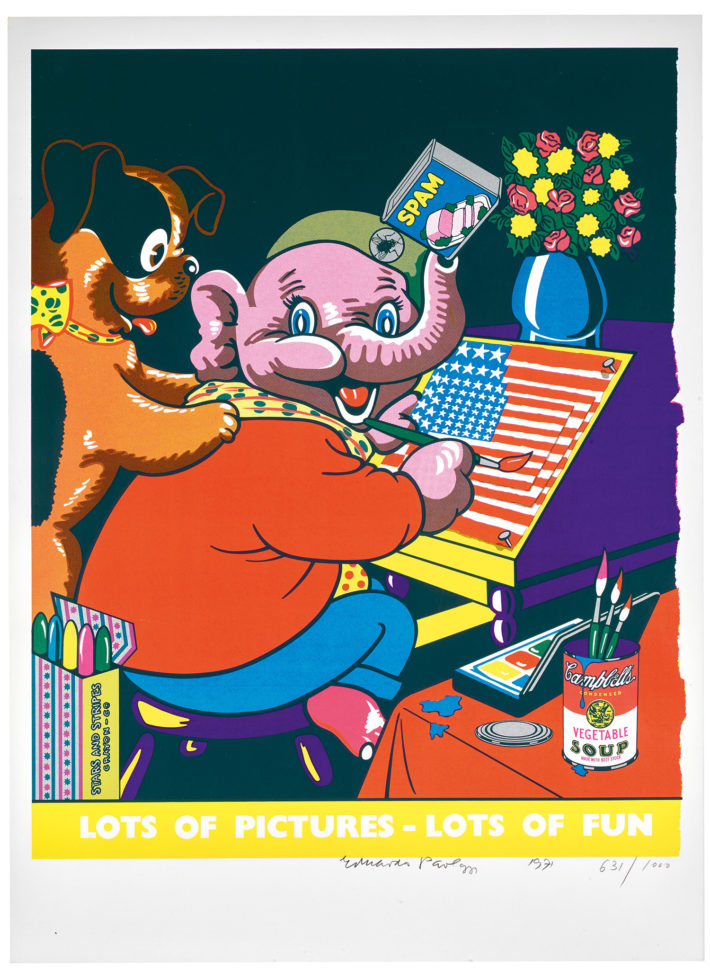 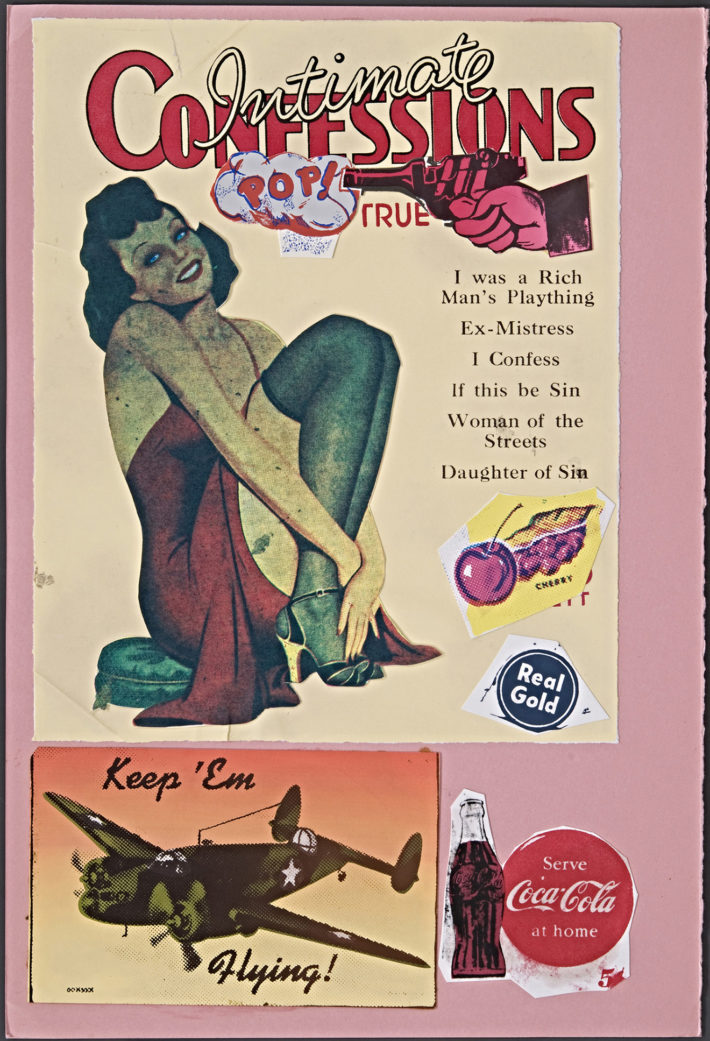 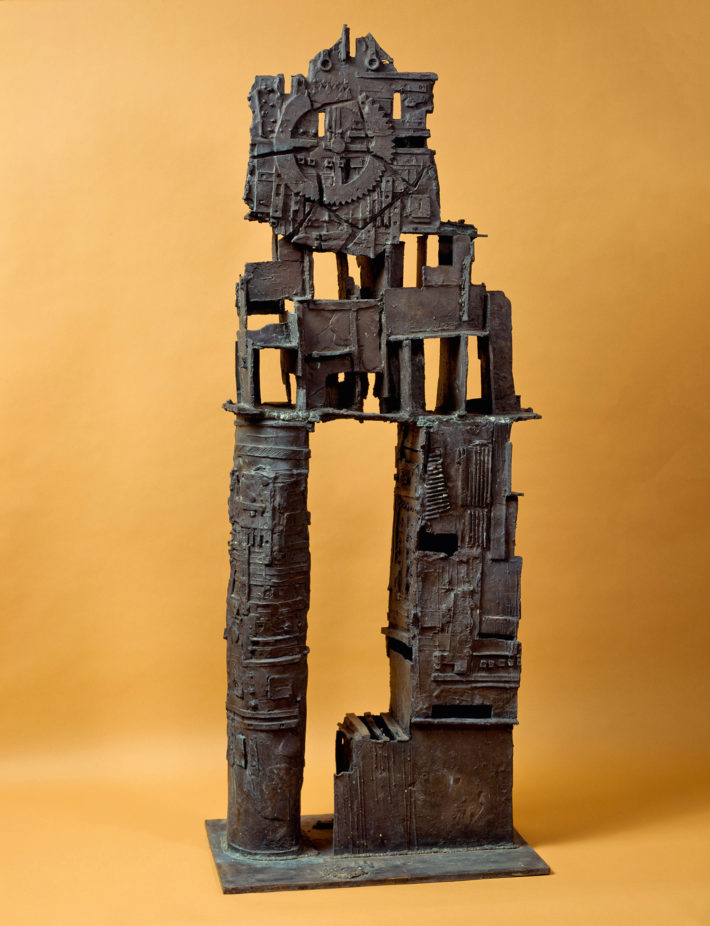 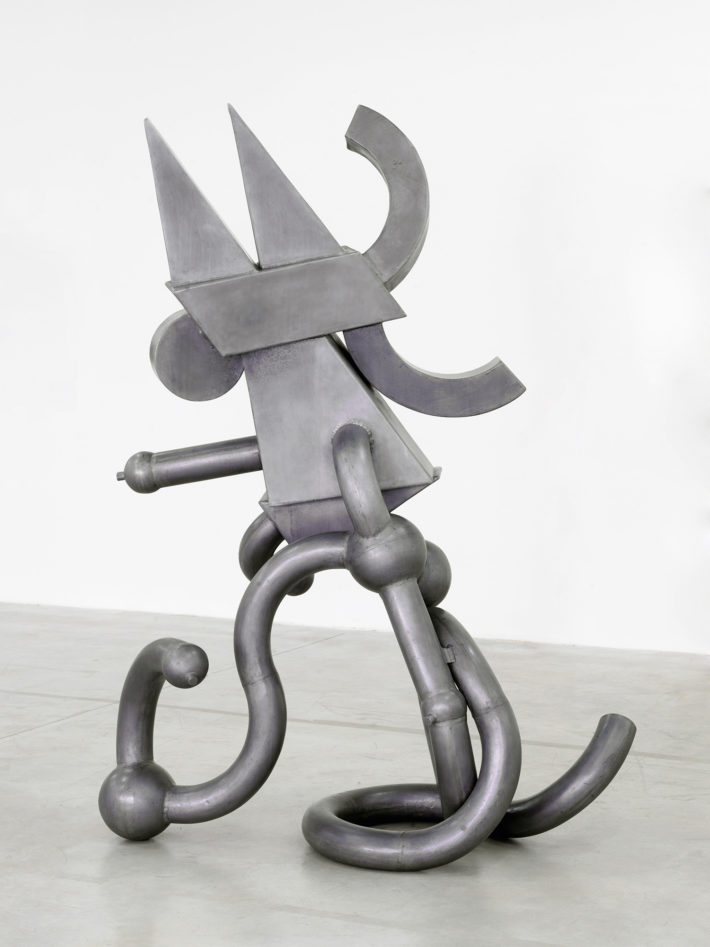 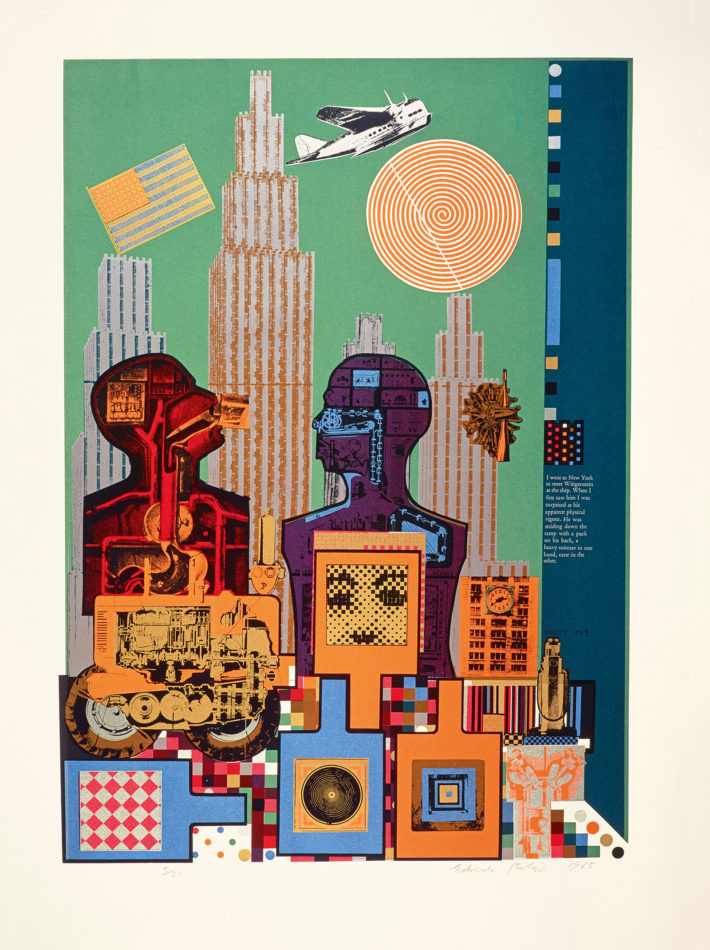 Eduardo Paolozzi, As is When: Wittgenstein in New York, 1965. © Trustees of the Paolozzi Foundation, Licensed by/VG Bild-Kunst, Bonn 2018. 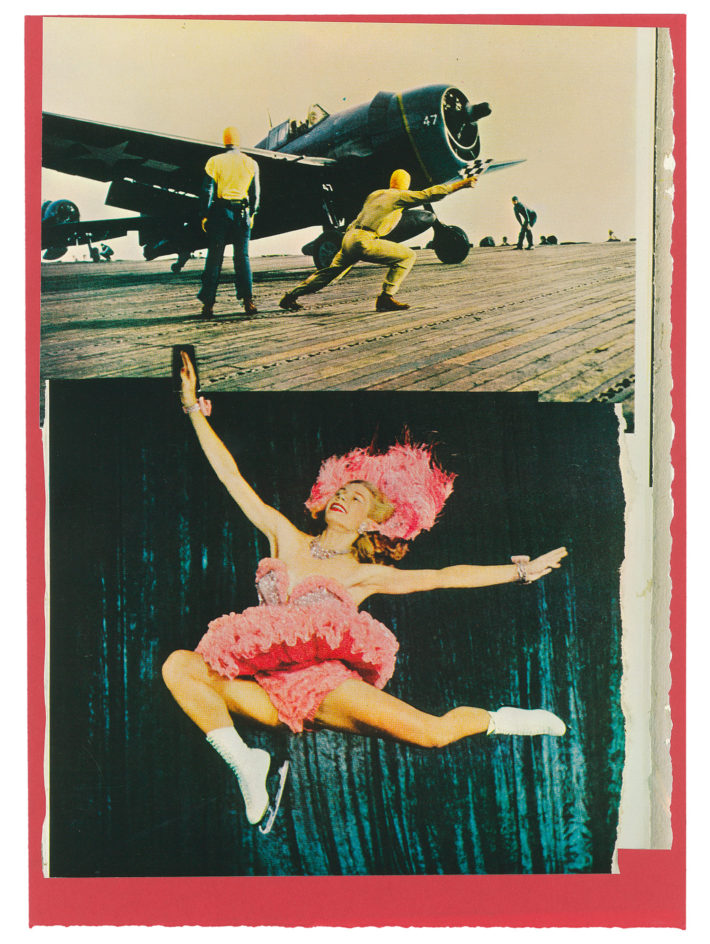 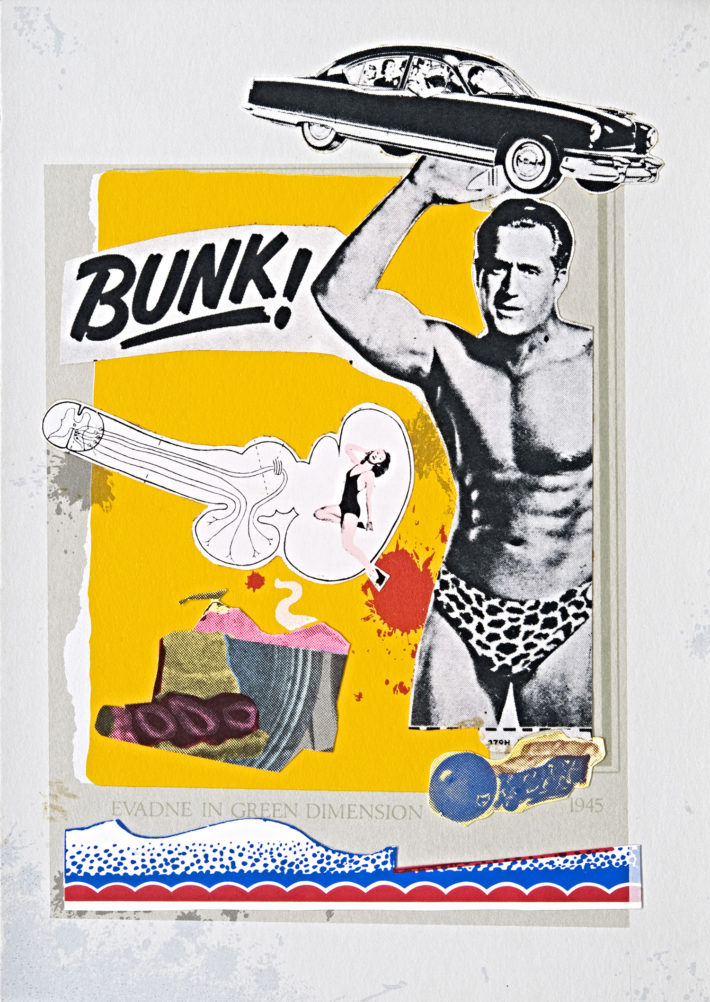 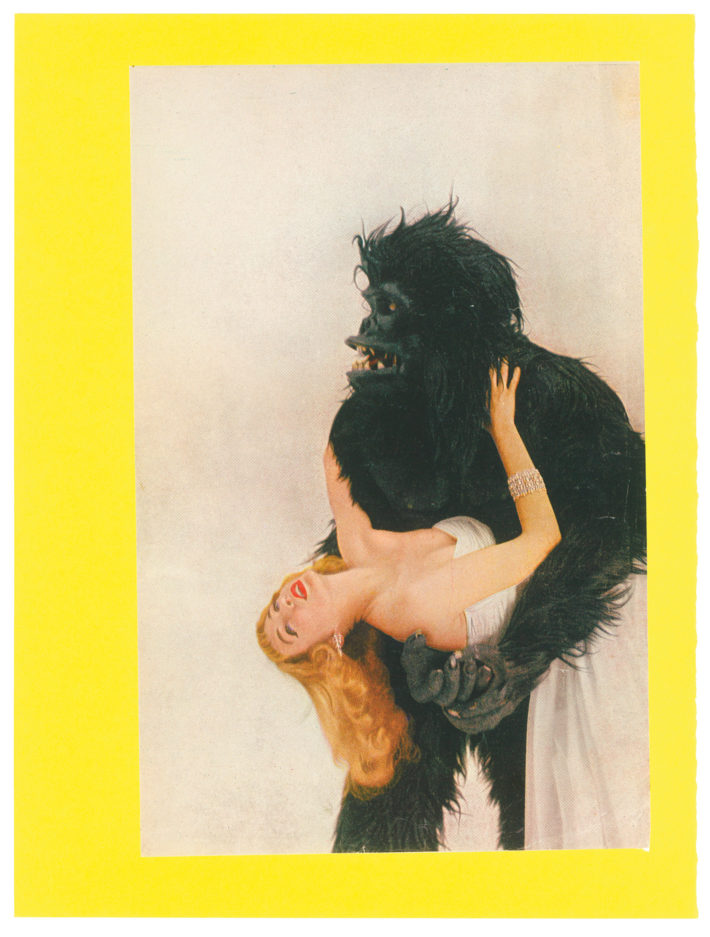 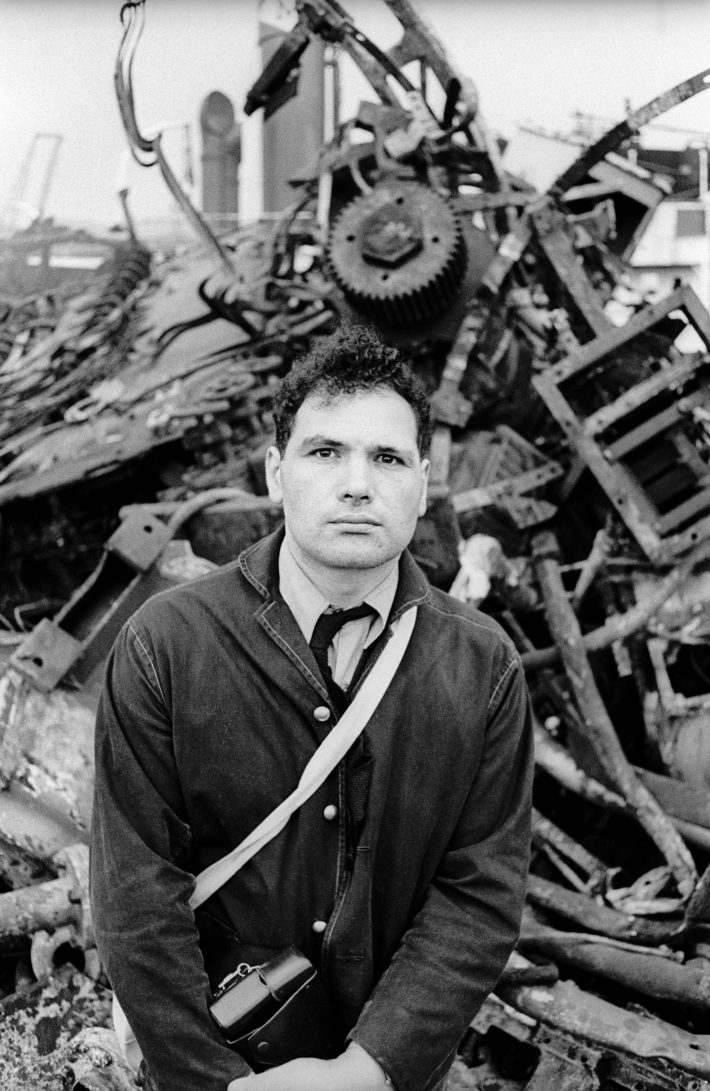