Alessandro Mendini
The Design Is There, What’s Missing Is the Utopia

One of the most important figures in Italian and world design and recent winner of the European Prize for Architecture, Alessandro Mendini has performed many roles over the course of his long career: magazine editor, exhibition curator, designer, art director and advisor to some of the best companies in the sector. His ideas have always found concrete expression in a variety of ways that have never failed to underline his belief in the virtues of exchange and comparison. In his case, the acceptance of the many faces of postmodernity has been a key to interpretation of the contemporary world, rather than a formal stylistic feature. We met him to look back at the principal stages in his work and to discuss some of the main themes of the current scene, certain that his crystal-clear gaze would not be obscured by facile indulgences.

In 1980 you wrote the Manifesto of Farewells. Is there still something you’d like to take leave of?

The Manifesto of Farewells was written at a time when I wanted to rid myself of a series of institutionalized themes. But it was also a goodbye to myself. Out of these needs emerged a sort of list, a piece of doggerel in keeping with an attitude that suits me, almost a method born out of the fear of being trapped in my thoughts. If you work for a long time without a break it’s easy to end up a victim of your own ideas, and this is something that happens to me often. So I try to avoid it. For instance, a few years ago I got caught up in a kind of mirage due to my work on the curating of Histoires de Voir. Show and Tell, an exhibition at the Fondation Cartier in Paris devoted to the work of the primitives: painters, sculptors, commercial artists and shamans who had created signs. I felt a desire to copy their drawings, and as a result discovered a whole universe that was capable of freeing me from the elements of my own style. I’m still working in this space, with techniques and kinds of paper that I used before graduating. I dug out the pastels I had made at the time and set about making drawings that are unfamiliar even to me as I do them. They are so strange that I call them Monsters (laughs). I do this for hours, every Sunday. 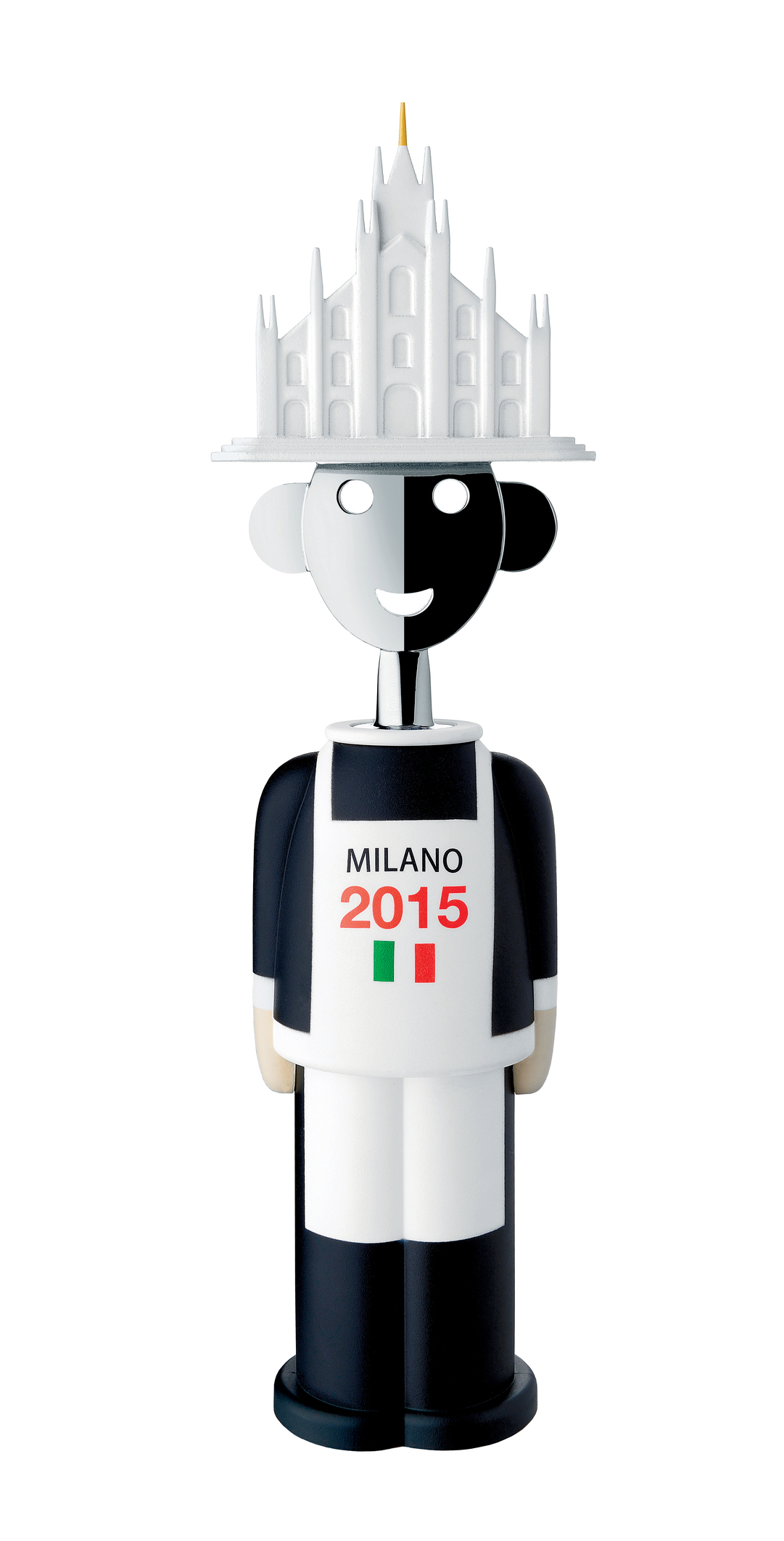 Is it like an exercise of saying farewell to yourself?

I work a lot with the mind, doing very little manual work: the only tool that I’m familiar with and know how to use is the pencil. So these drawings turn into dances on paper and are a moment when I am free of thought. It’s a kind of meditation. Besides, not being much of a listener to music, I am particularly fond of the scratching of the pencil.

In the seventies you argued for the need to go back to the “body as a natural object.” Do you think that the body is still the basis of design?

At that time—I’m thinking for example of the experience of Global Tools—there was an attempt to get away from the intellectualism of design by proposing a simplified physicality, in keeping with the principles of Body Art. In particular, Lea Vergine and Vito Acconci showed a physical-sexual need to reappraise the body. In my view these were rather naïve aspirations, but after all these years have passed there are still young people who ask me about that moment. Which to me seems interesting from another, more general point of view.

In comparison with the realistic world of today, that was a moment of utopia. When one says utopia one means a search for something that lies beyond our possibilities, even it is just a little out of reach. This happens very rarely now. Because everything is pragmatic, realistic, technologized. Vision is lacking and this seems a serious matter to me. 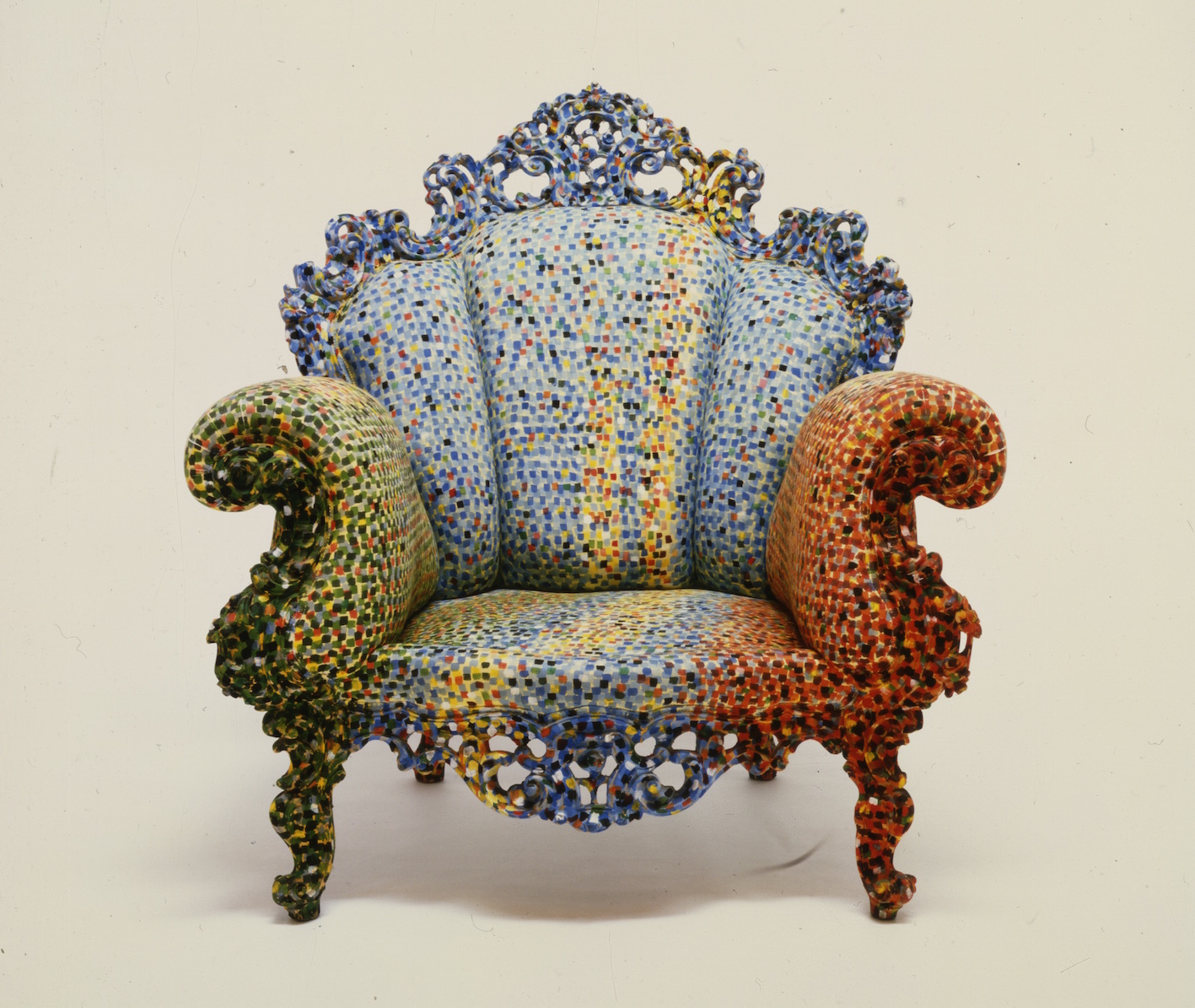 Why do you describe contemporary designers as a generation of new enigmisti, “puzzle enthusiasts?”

Enigmatic design is design that is puzzling. The puzzle or riddle is a thing of great fascination, something mythological that in itself leads to utopia and so cannot have a solution. The puzzle enthusiast, on the other hand, is someone who solves pointless problems. Well, many of today’s designers, however intelligent, are dealing with theorems linked to pointlessness. To me it seems an undeniable fact.

Put like that it’s not a very optimistic view.

And the phenomenon of self-production? Is that too an easy solution to a puzzle?

Three years ago I tried to coordinate the self-producers of Milan within the framework of an association called Milano si autoproduce. I wanted to see whether it was possible to find a unity of method or image, of style or interests, through the independent activity of a series of brains. It was a collective in which I had gotten some very different people involved: from Enzo Mari to Gaetano Pesce, from elderly craftsmen to very young students. The experience proved a great disappointment for me. In the sense that nothing came out of it. The self-producer is very often an uninteresting person, who is not able to achieve the quality of the craftsman.

But you were a pioneer of self-production with the Studio Alchimia. You ushered in a dual track of design that proceeds in parallel on the side of the self-managed product and on that of industry.

Alchimia had different motivations: at the time I was expressing my opposition to an industry that to me represented “bad consumption.” But an industry that was strong and in Italy still highly experimental. Today on the other hand young people leaving school are unable to make contact with industry because it has entrenched itself and prefers to be snobbish about the foreign. For the young, the effort to establish contact often comes down to a demoralizing form of begging from which self-production appears to be the only way out.

So it’s a kind of stopgap.

It’s the only way in which you can say “I’ll so something and see how it turns out.” Then there is the front of the makers. Which seems more positive and interesting to me, as it’s based on an international network of workshops that creates a sort of excitement about technology and manufacturing with these 3D printers, although they in turn have become rather bogus myths. 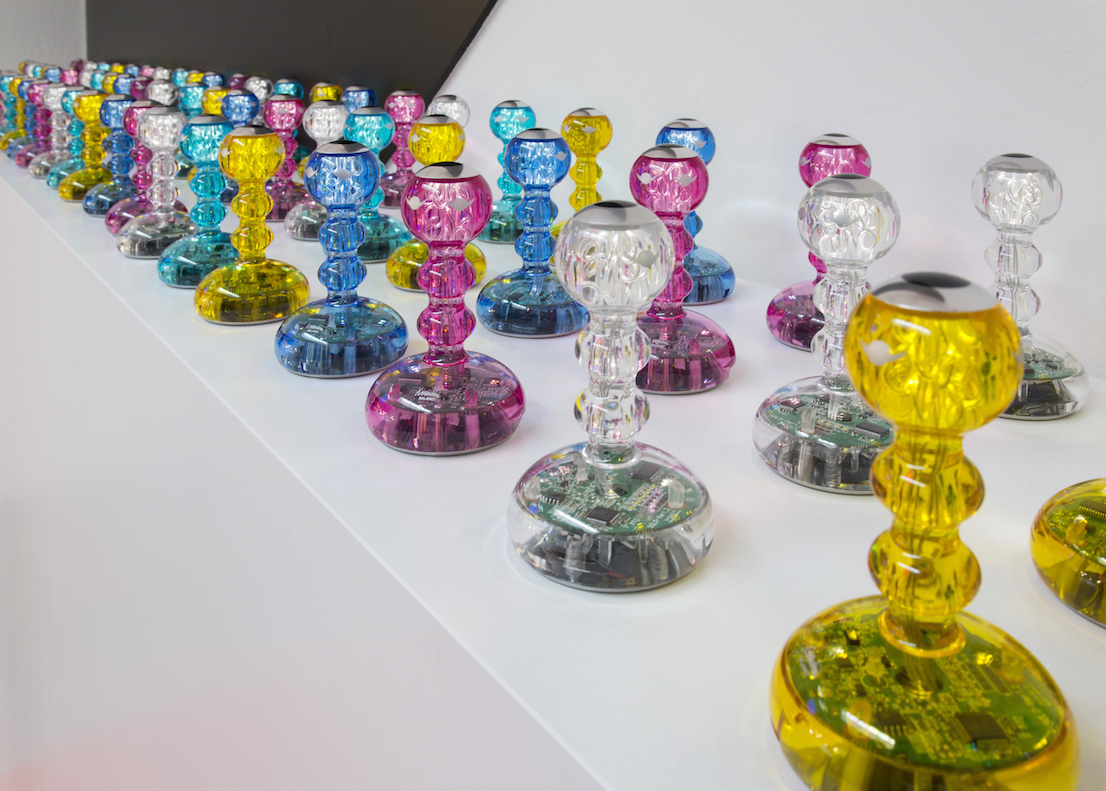 It is a mistake to think that everyone can make the objects they need. I don’t understand, for example, why a doctor should have to design drinking glasses for himself when there is a tradition and an age-old history behind them. The disciplines ought to stay within well-defined areas. I think that the types of objects and their materials—glass, steel, porcelain, fired clay—are the product of thousands of years of history with a depth of development and research. This depth cannot be canceled out by the first person to come along and make a drinking glass with a printer. From this point of view, I consider myself almost a reactionary. Those who do self-production for its own sake create things of an extreme mental and structural inanity.

When I founded the magazine Modo I obtained funding from a dozen companies: in a sense I became a designer by running the magazine, which in the system of the time was an anomaly. But it was thanks to the magazine that I got to know the designs of Stefano Giovannoni. I took them to Alessi and six months later the Girotondo was born.

Something that would be very unlikely to happen nowadays. Have we reached the end of design, at least of industrial design in the traditional sense?

No, because you only have to go to Samsung to see that design is in excellent health. What has come to an end are certain micro-situations that may simply not be able to exist outside particular contexts. The death of design, of chairs, of art: these are all paradoxes, oxymora, that resurface from time to time. 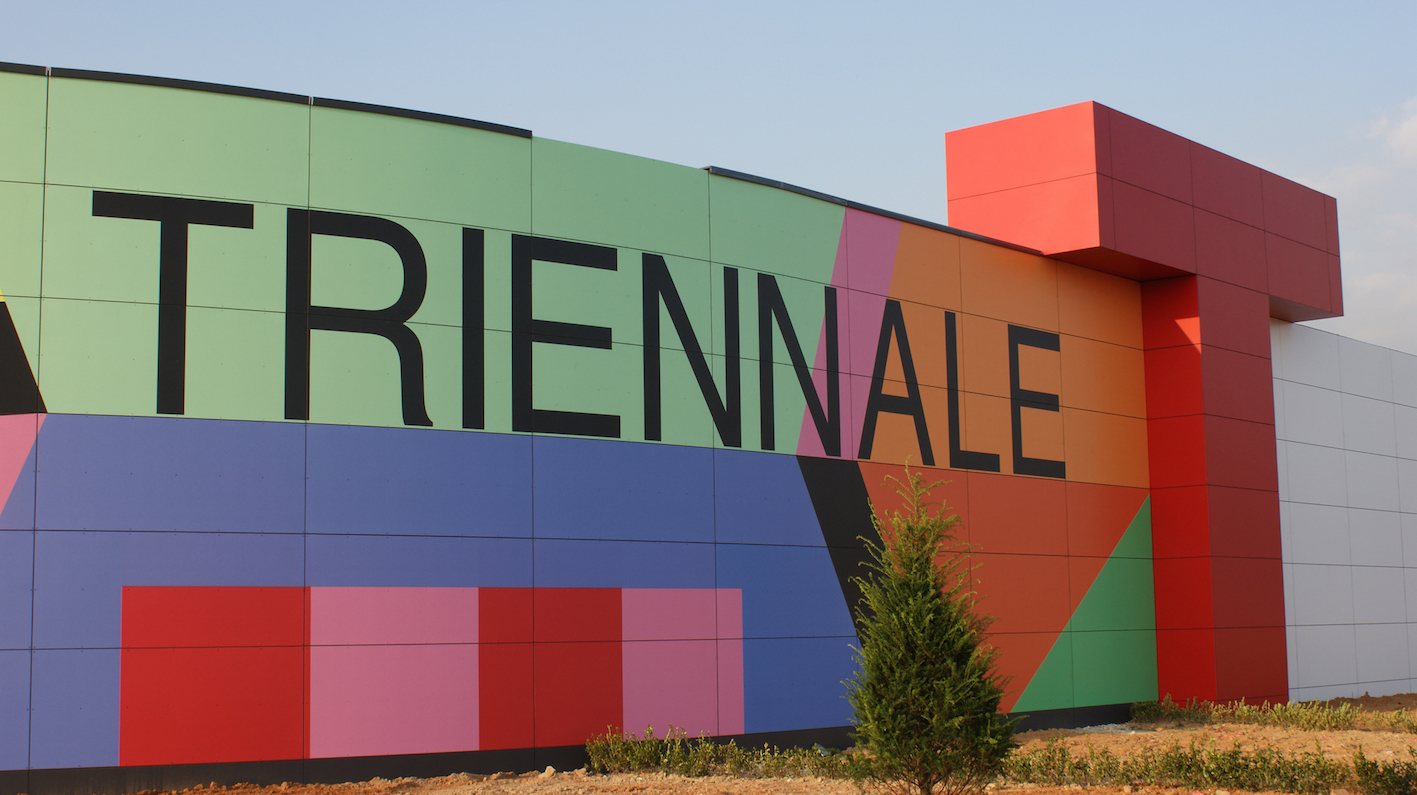 What do you think of the phenomenon of art design?

You need to look at what the goals are. For example, I’ve always been poised between art and design (a bit like Gaetano Pesce and, for some time now, Andrea Branzi). So I could say that I want to make a sculpture and in order to do it make a chair-sculpture. It’s an interesting area of applied art, the same one in which, for instance, you can place the designs of Carlo Bugatti or Carlo Mollino. So the story of art design is an old one that keeps going. A very interesting story for someone who knows how to do it, for someone who is an “artist.”

Certainly, Ron Arad’s generation has also tried to go in this direction. Perhaps because it’s one for which there is a market, even if it’s very much a niche one?

It seems to me that Arad does it not because he has found a market, but because it’s his way of designing. Having said that, art design is fortunate enough to have a market, even if is limited and certainly less accessible than Alessi’s.

Is it possible to reestablish a dialogue between designers and manufacturers?

You have to realize that Alessi, to take one example, had its moment not because there was someone who went there to offer them a design, but because the company created a space for research. I myself helped to a create those conditions by launching particular experimental projects on whose basis the most suitable designers were then brought in. It’s not a good idea for industry to start out from itself, controlling its own strategy and its own scenario. And entrepreneurs need to give careful consideration to the proposals of the young.

What are you presenting at the Salone and what are you working on at the moment?

I’ll be presenting a few works at the Salone, as do designers from all over the world. Some are good examples of a “professional” approach, while others are more radical. All little things, though. Among them, the Puppet Theater in the park of the Triennale and two products for Kartell: the Crystal Palace wall clock and the Roy stool (a tribute to Roy Lichtenstein). It’s the first time I’ve worked with Kartell after so many years of design.

Let’s end with the Expo. What do you think about it?

If the Expo contributes to an economic recovery then it’s a good thing. As for the theme of hunger and nutrition, however, we all have a guilty conscience. I will be showing a gold Communion wafer set on a piece of Cantù lace (spiritual food) at the French pavilion. Then if we are talking about the grounds of the Expo, in the end it is going to be a dump for all the styles of contemporary architecture. 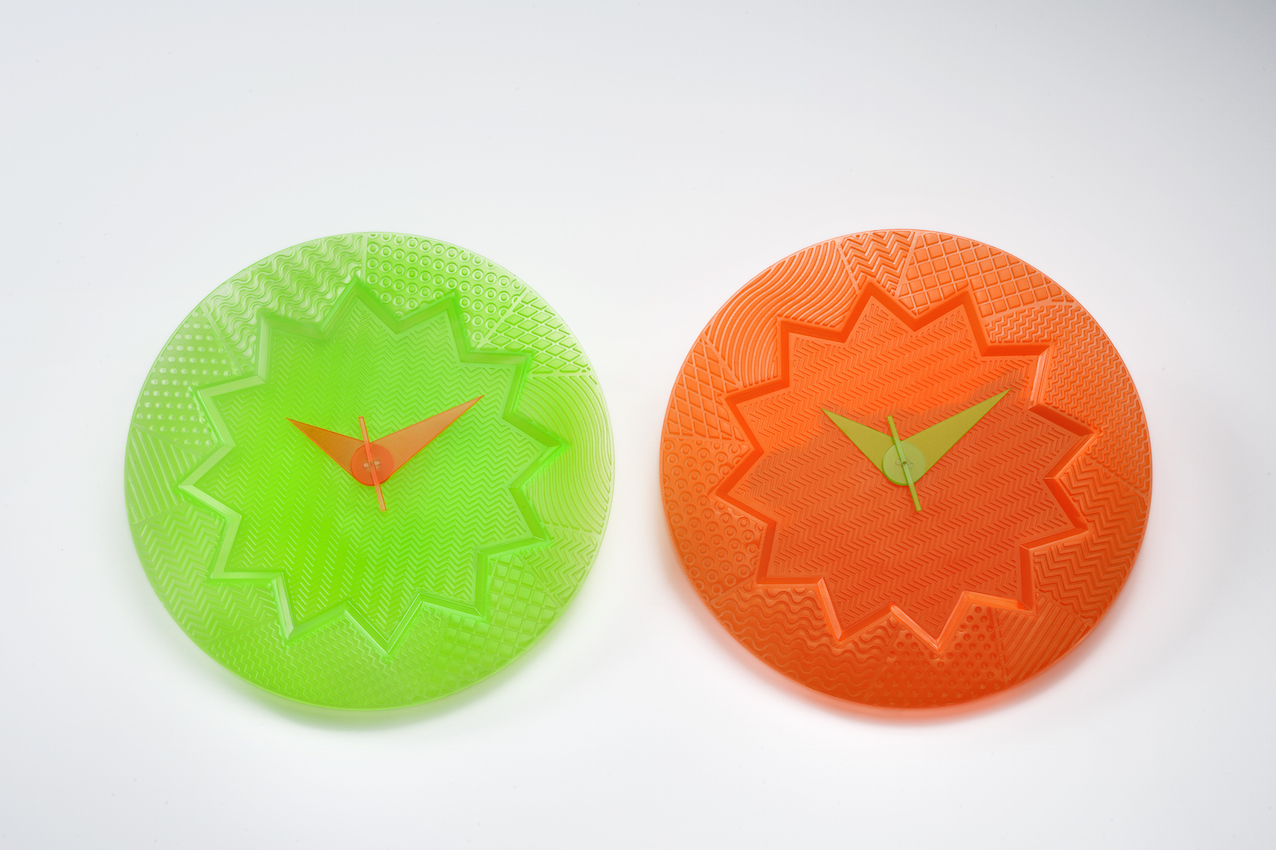 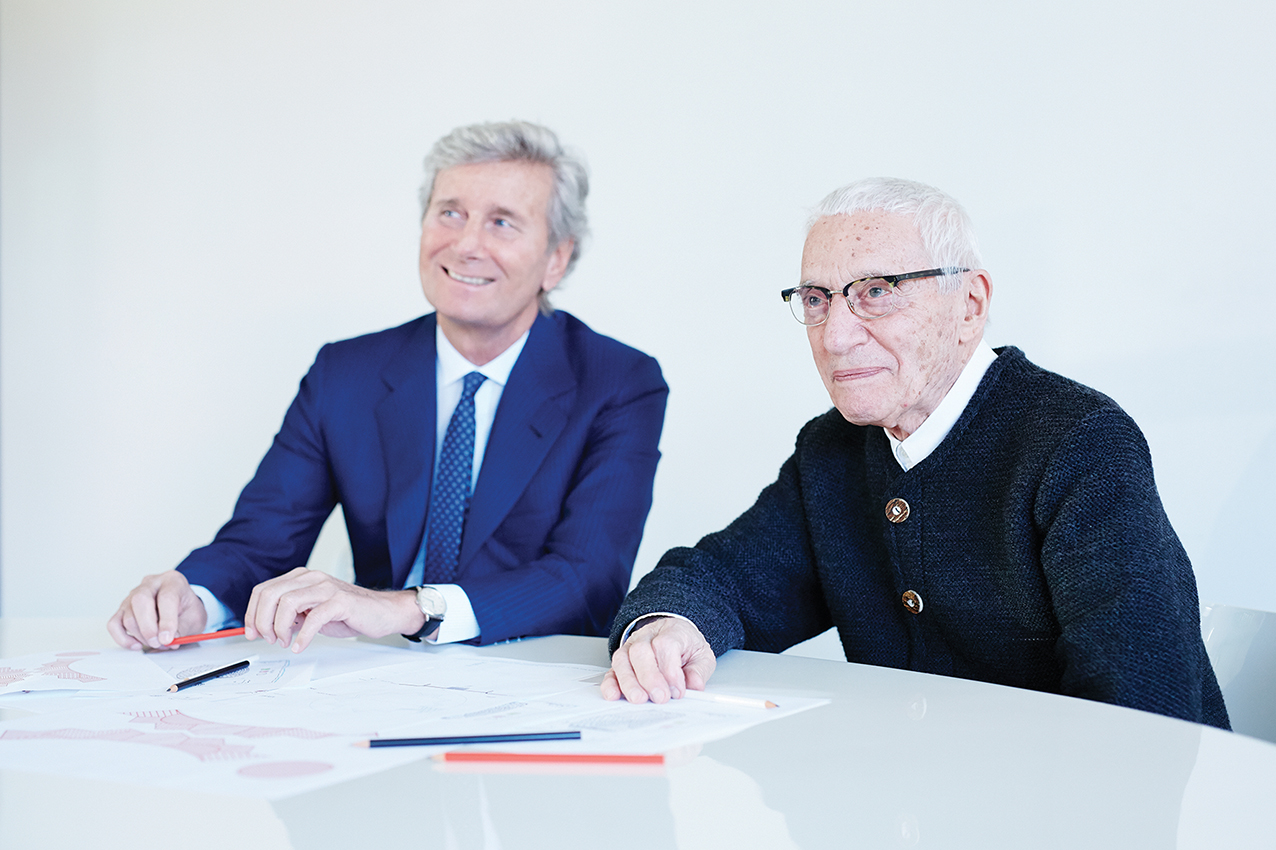 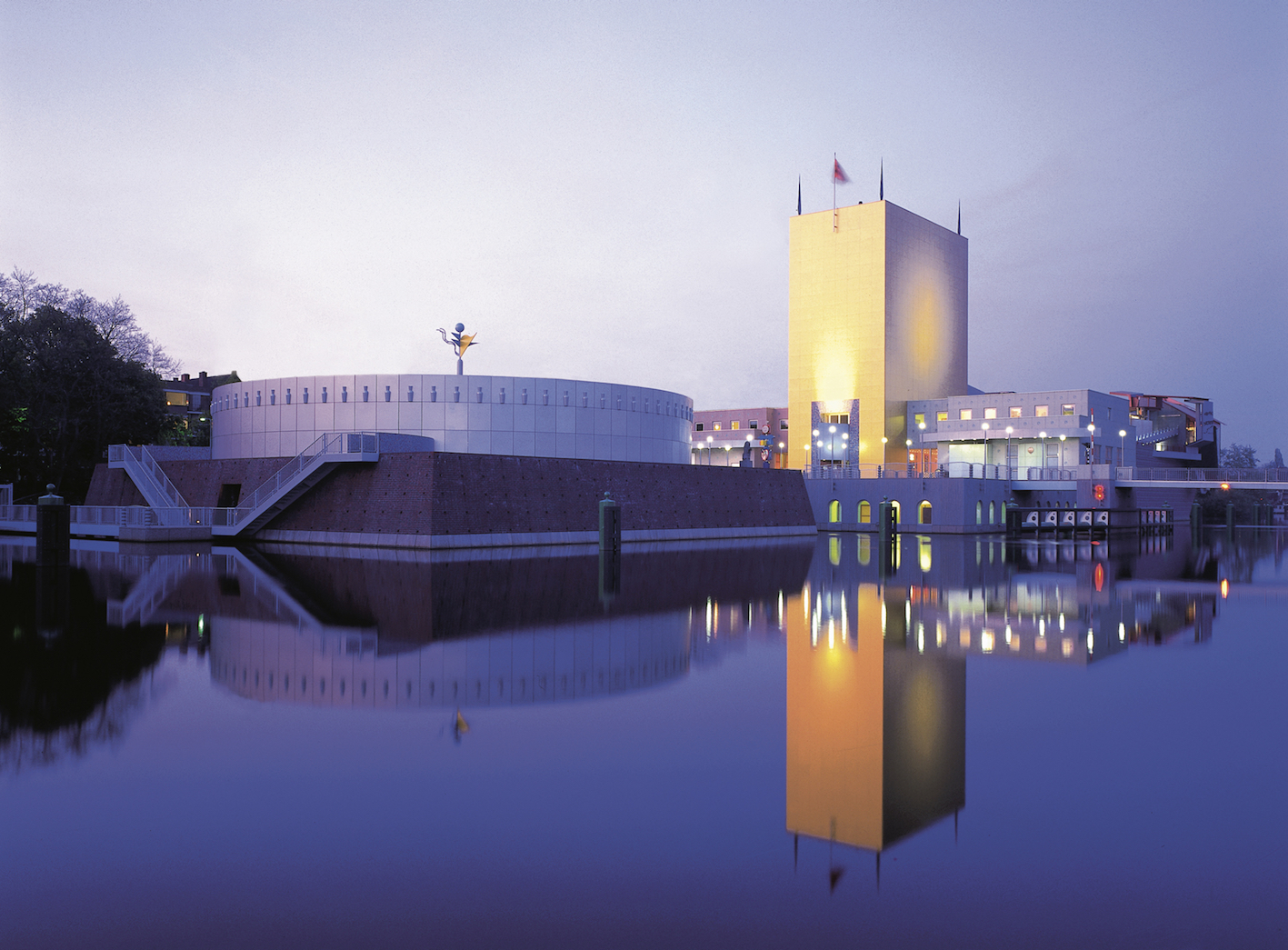 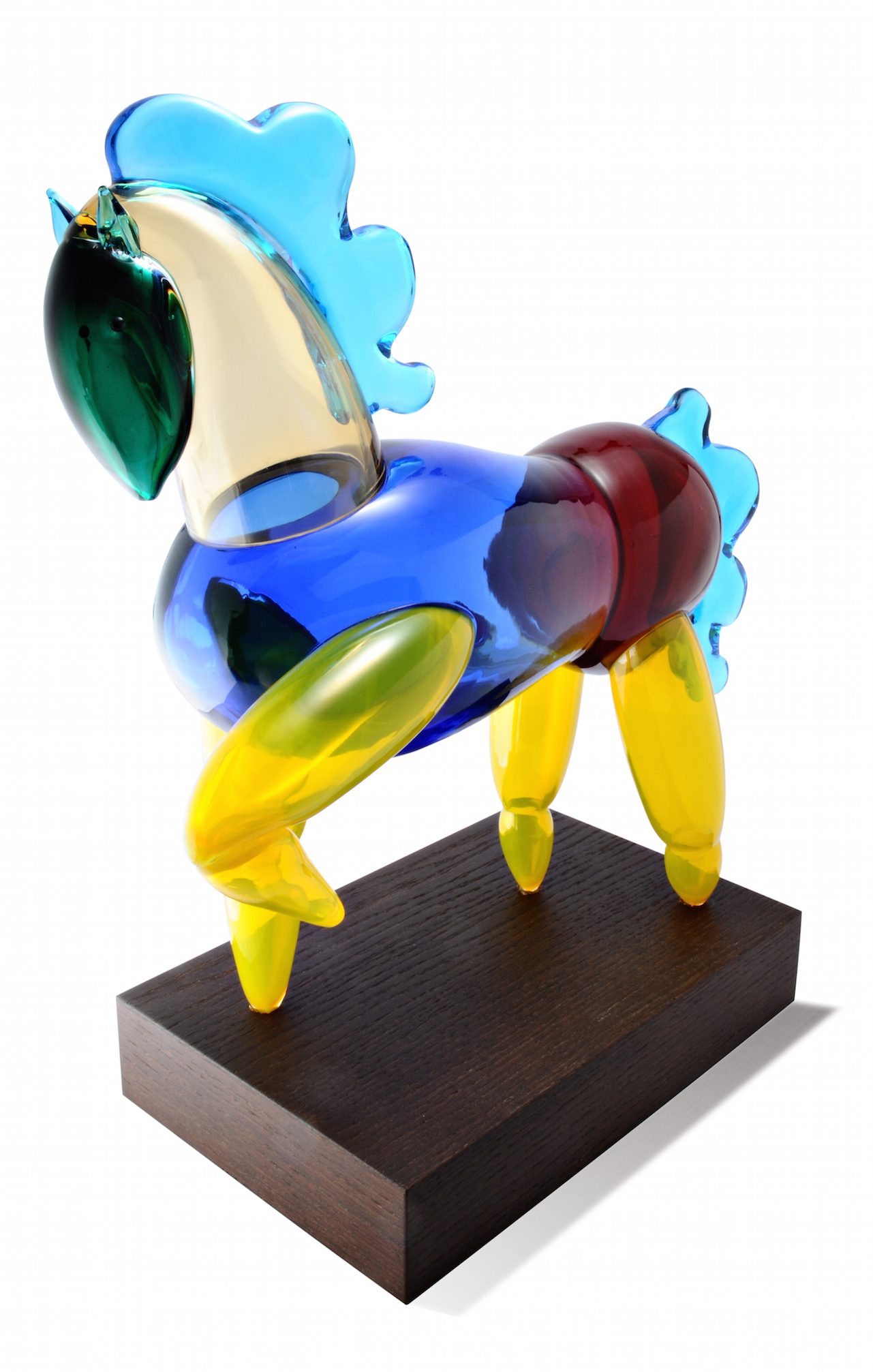 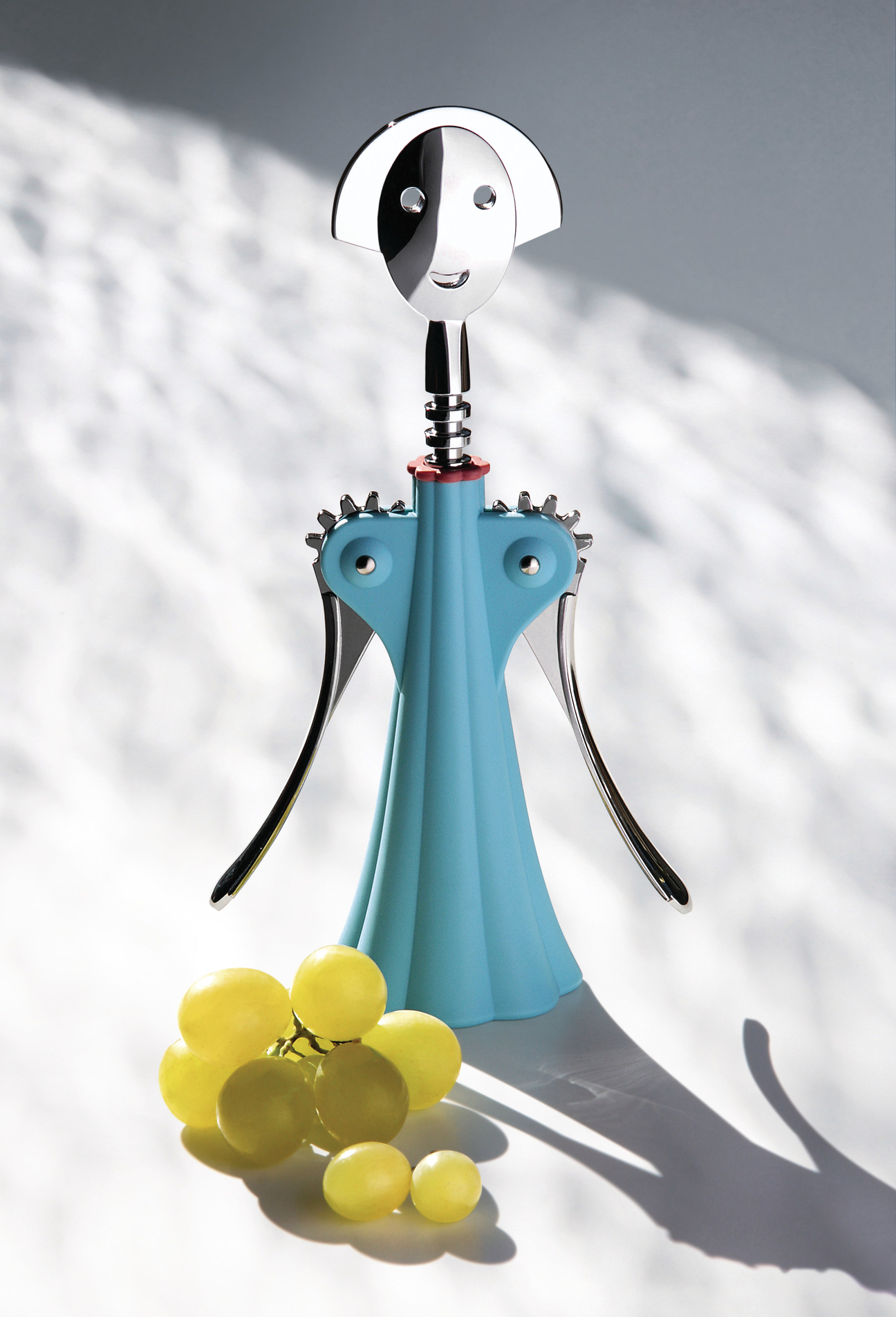 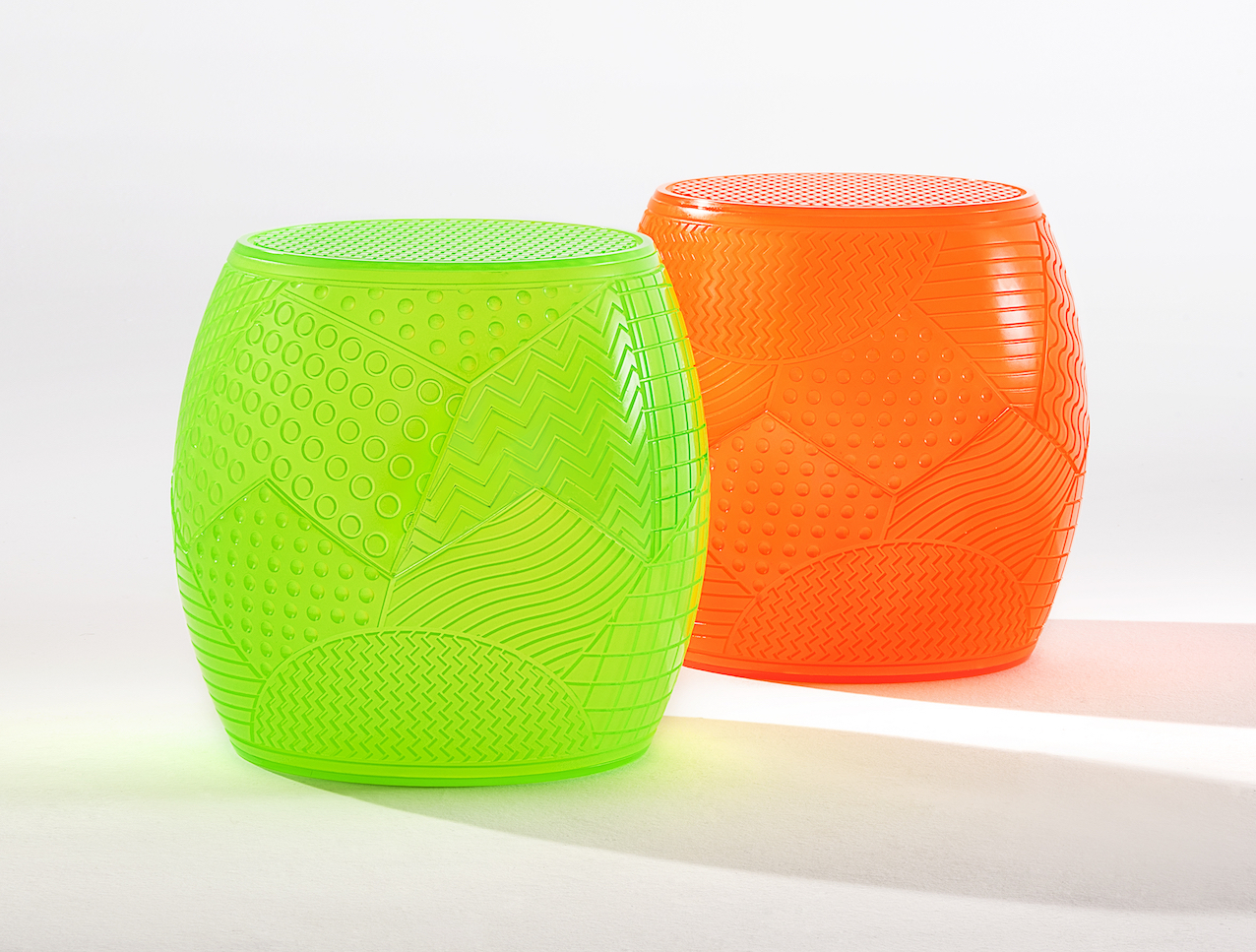