July 20, 1969. A memorable date for those of us who were there as well as for those who were not born yet. The historic landing on the moon launched us into the space age: “That’s one small step for [a] man, one giant leap for mankind,” declared Neil Armstrong as he set foot on the moon’s surface. There is a chronograph, created in 1957, closely linked to this legendary event, the only one to have passed all the rigorous tests that NASA had carried out to select the model best suited to astronauts on a space mission: Omega’s Speedmaster, which accompanied the men of Apollo 11 to the moon, earning itself from that moment on the name of Moonwatch. A timepiece that has gone down in history and that in all these years, something fairly rare in contemporary watchmaking, has remained essentially true to itself, despite its numerous variations and versions, and is still regarded as a classic today. 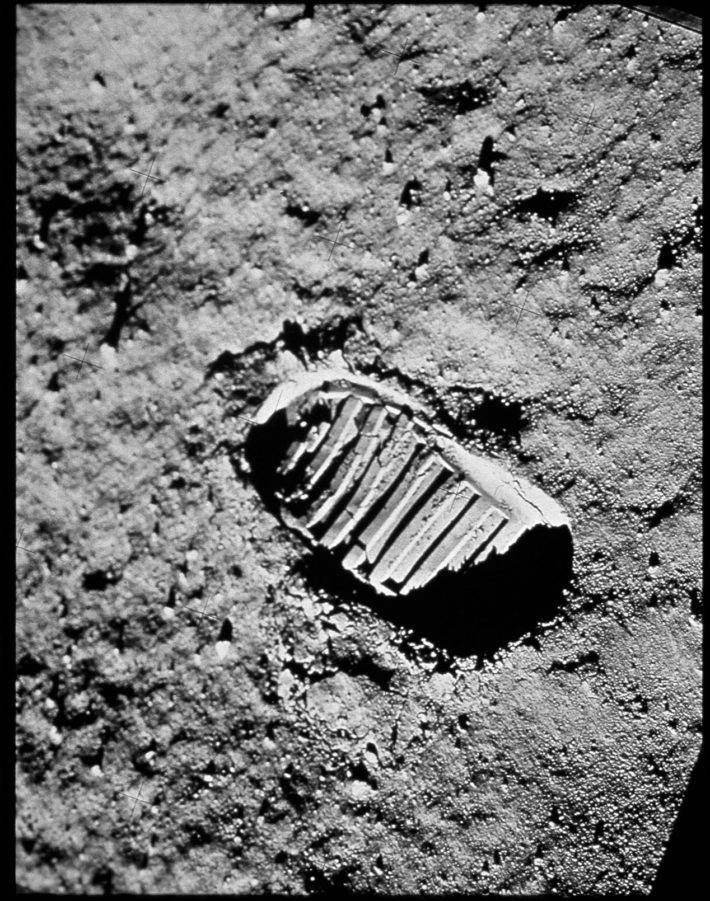 In the year marking the fiftieth anniversary of the moon landing, Omega has brought out a special edition of the Speedmaster Moonwatch, fitting it with the historic caliber 321, the first movement used in 1957 and the one that also powered the Speedmaster ST 105.012, worn by Buzz Aldrin on the 1969 mission. Because, even though the new caliber 861 had gone into production in 1968, the models chosen for the first human flight to the moon were fitted with the 321, already mounted on the Speedmaster ST 105.003 that in 1965 accompanied the astronaut Ed White on the first walk in space  by an American. It is a hand-wound movement with chronographic functions controlled by a monobloc column-wheel. An added value from the technical viewpoint, in that this system ensures greater precision and softness in reaction to the activation of the pushers. So no co-axial escapement or Master Chronometer certification as with the most up-to-date Omega technologies, but a faithfully reproduced historic caliber that has a frequency of oscillation of 18,000 vibrations per hour and boasts a power reserve of 44 hours. A real gem for enthusiasts, on which a specially assembled team worked for over two years in great secrecy, utilizing the original drawings to reconstruct the movement in the most accurate way possible. The born-again caliber has made its debut in the platinum version of the Speedmaster Moonwatch 321, which reveals the finishes and workings of its new heart through the back of sapphire glass. The 42-millimeter-diameter case has the unmistakable twisted lugs that characterize the profile of the Speedmaster, with the middle that grows wider to provide lateral protection for the crown and pushers and becomes slightly asymmetrical. Equipped with a black ceramic bezel, it has the typical tachymeter scale that has always been a feature of this model, in white enamel. The dial is made of black onyx, with indexes and hands of white gold. In homage to the celebratory theme, Omega has used real slices of moon meteorite for the chronograph’s three subdials. The strap is made of black leather with a platinum buckle. 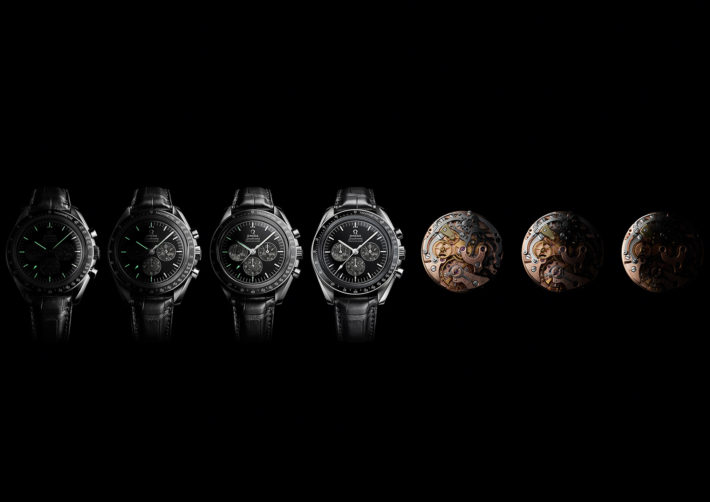 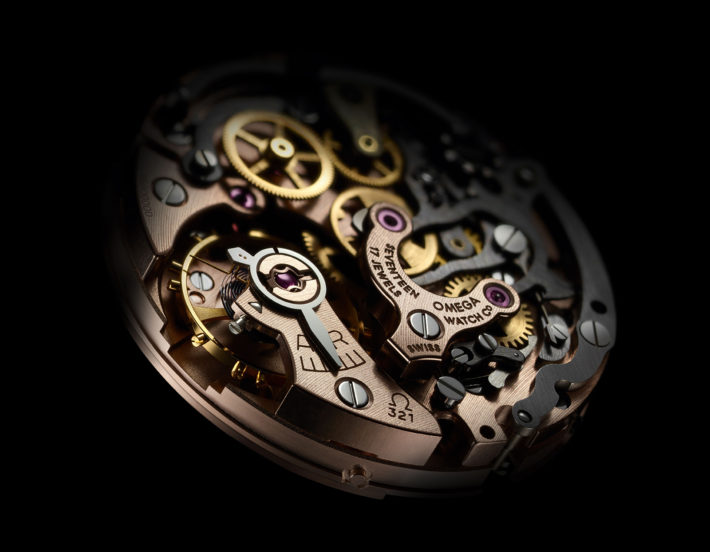 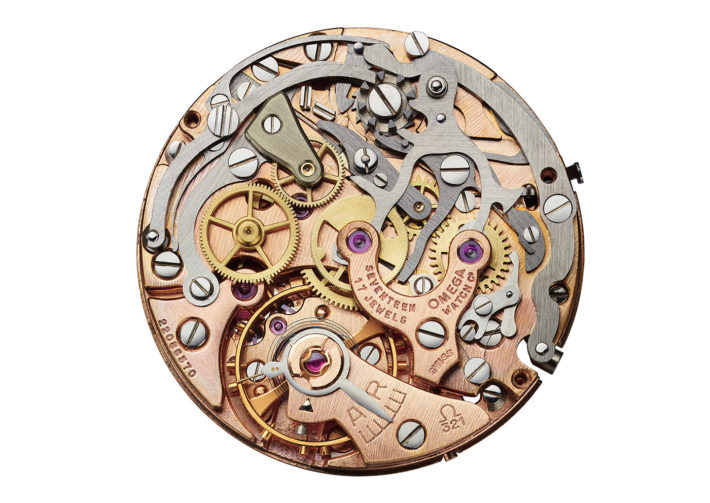 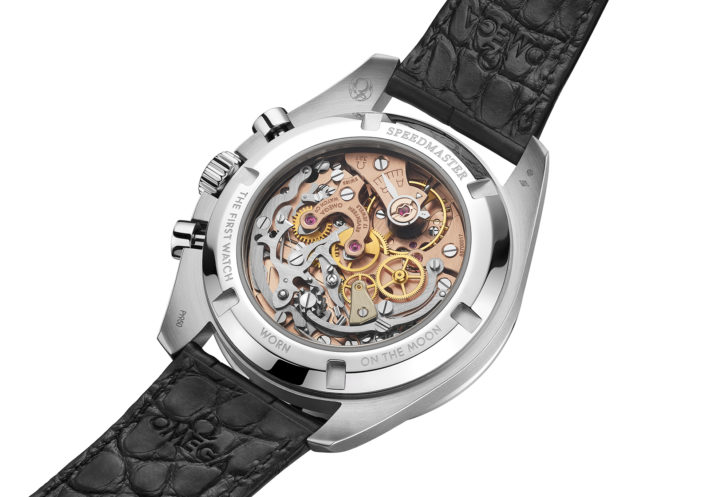 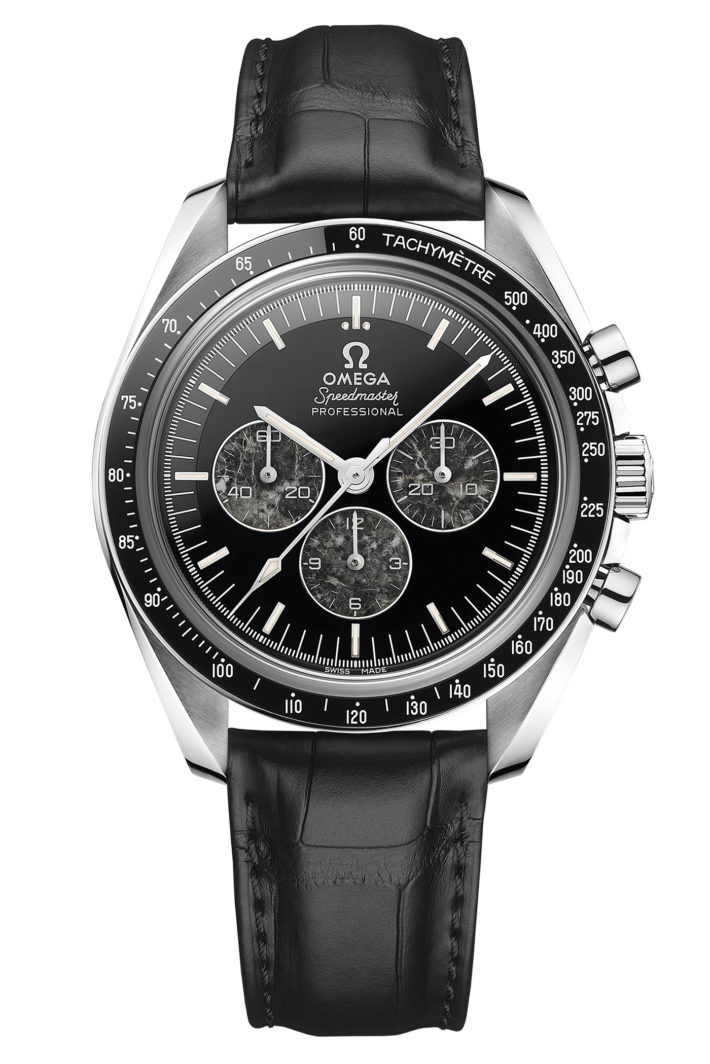 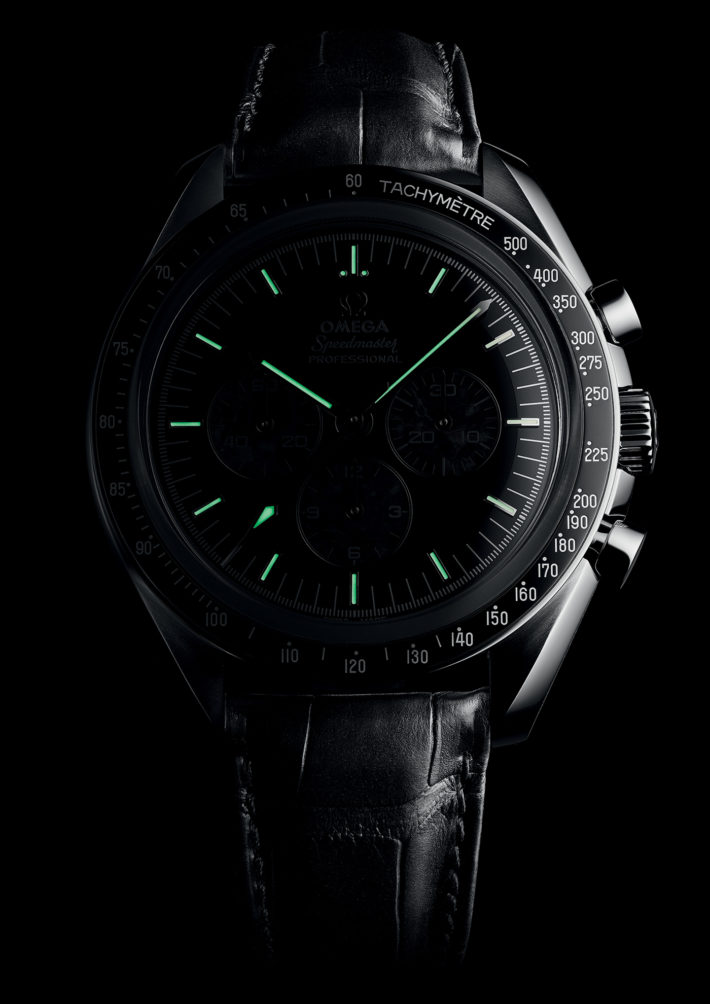 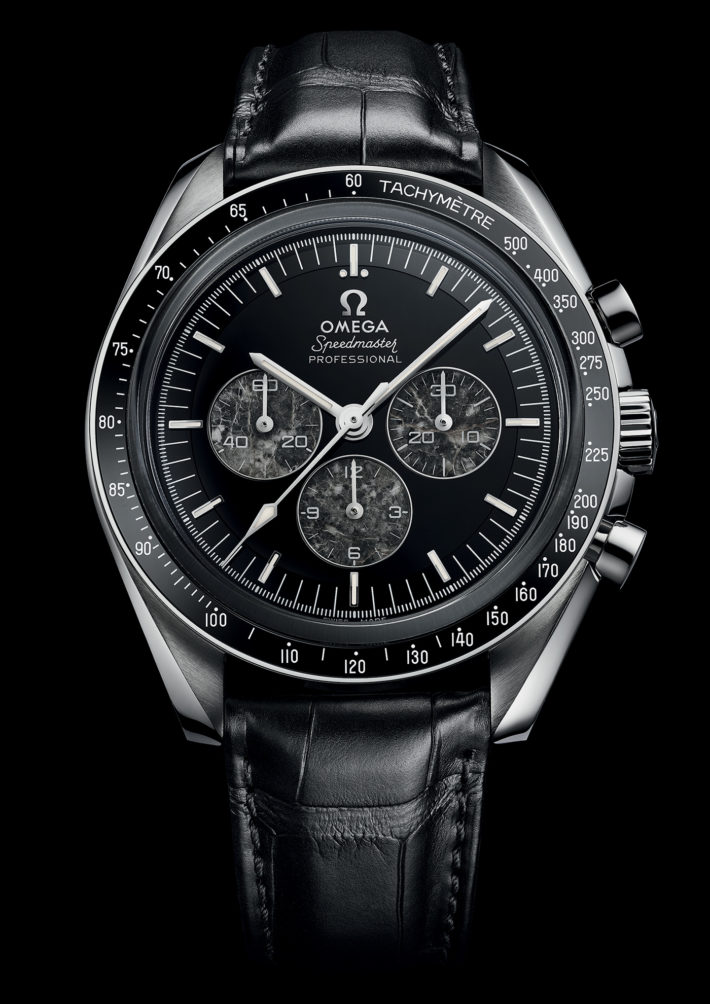 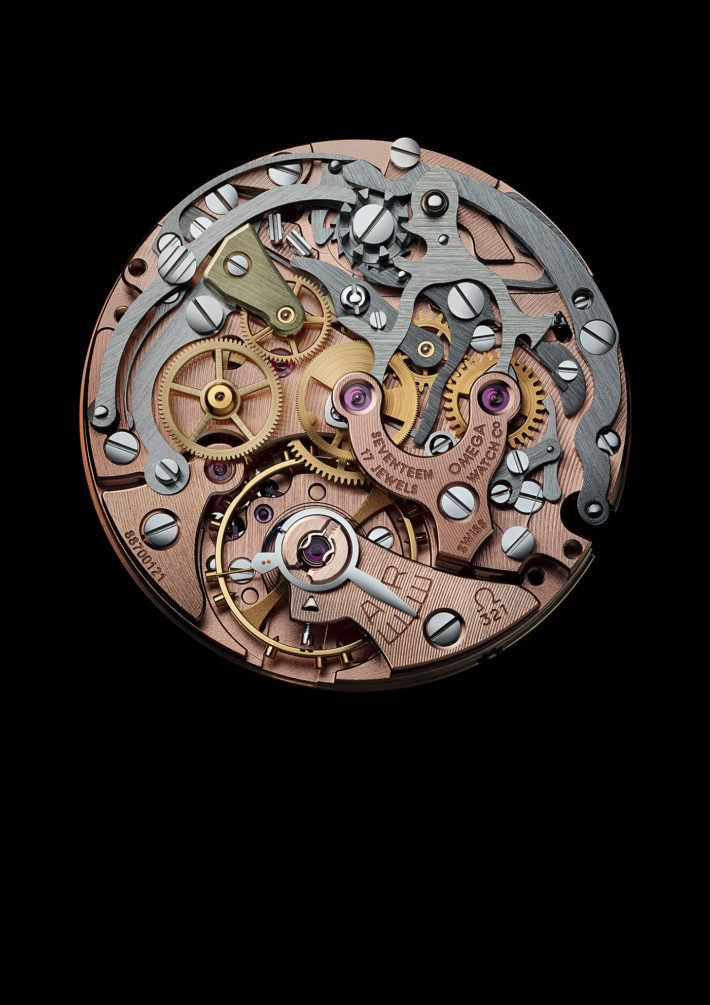 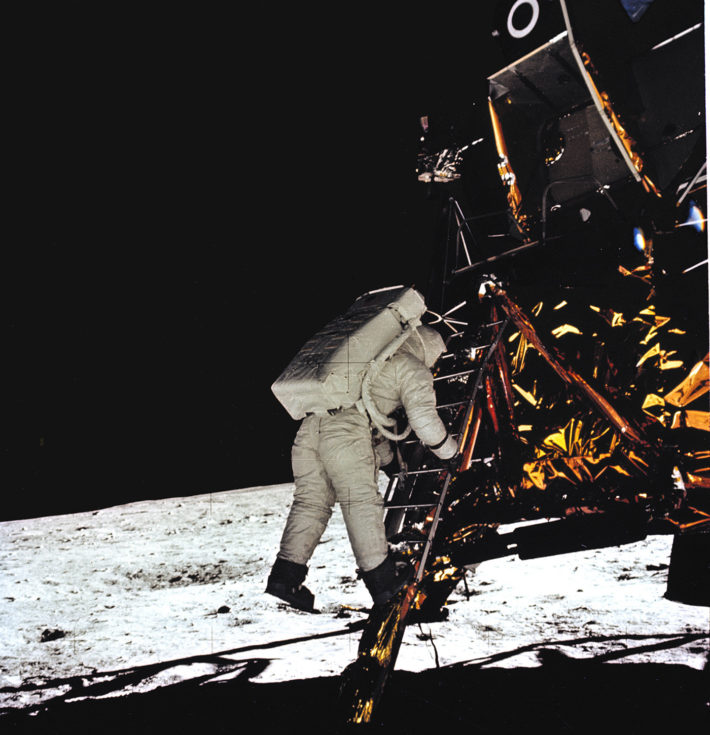 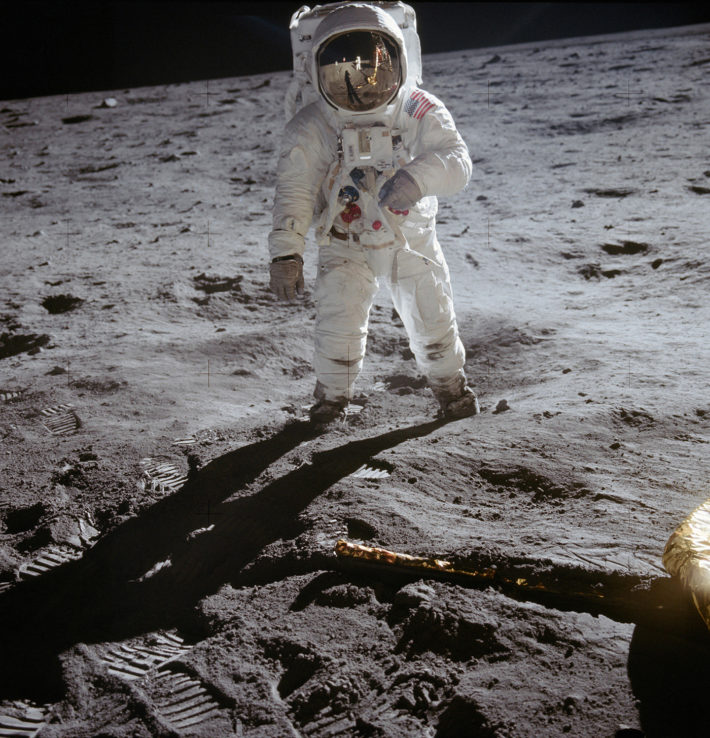