The entrance halls of 20th-century Milan tell fragments of stories in a cultured and refined language. A recent volume, Entryways of Milan – Ingressi di Milano, published by Taschen and edited by Karl Kolbitz, has set out to document these hidden and often spectacular spaces through a collection of essays and previously unpublished photographs by Delfino Sisto Legnani, Paola Pansini and Matthew Billings. According to the historian of architecture Daniel Sherer, one of the book’s authors, Milan is the city of entryways, just as Bologna is the city of porticoes, Naples of staircases inside courtyards and Venice of hallways opening onto canals. Milan is not the only city in which noteworthy entrances are to be found, obviously, but it is the one in which the personality of these means of access is more marked—a personality which unites the sober simplicity of the buildings’ fronts with the decorative richness of their internal spaces and which recalls a civic tradition of formal rigor and cleanliness (going back as far as the 16th century). In the 20th century, Milan saw the construction—and reconstruction, after the war—of a multitude of apartment houses and condominiums that on the one hand repaired the urban fabric rent asunder by war and on the other created the new face of a bourgeois, industrial and cosmopolitan city. We are not talking just about apartments with internal gardens, terraces, loggias and courtyards, but also about entrance halls compositionally arranged on more than one level, by means of steps and niches, porter’s lodges and basins of water, staircases and elevators; lobbies sumptuously furnished with vases, plants, sculptures, mosaics, bas-reliefs and chandeliers; spaces decorated with wood paneling, graffito plastering, slabs of stone, ceramic tiles and even works of art and trompe-l’oeil. 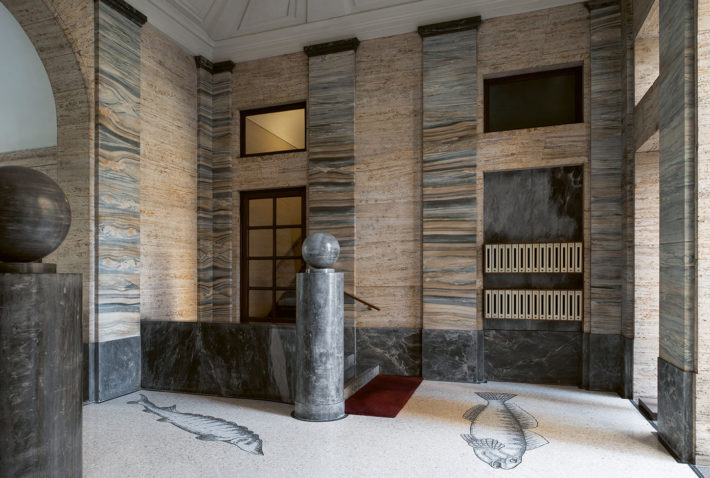 When all is said and done, the hallway is a symbol of a social microcosm that lies halfway between the privacy of the home and the unfamiliar environment of the street. In the customary daily ritual of passage from the house to the city, and vice versa, entryways form the backdrop to simple actions so habitual that they pass unnoticed but that are closely bound up with the Italian lifestyle: the picking up of letters from the mailbox, the figure of the porter, the relationships and brief encounters with other occupants of the condominium. The architectural period that Milan went through from the 1920s onward was a particularly fertile one: the advent of modernity resulted in hybrids with the classical heritage, drawing amply on artistic influences deeply rooted in Milanese culture: Futurism, Boccioni, Balla, Sant’Elia, de Chirico, Sironi, Carrà. Giovanni Muzio’s Ca’ Brütta (1922) prompted a negative reaction from the public, which did not immediately comprehend its innovative style, but would remain a milestone in 20th-century architecture. The aesthetics of the Fascist regime, which encouraged the use of autarkic materials, had among other things favored a revival of the art of mural decoration, and in particular of ceramics. The moderate cost, durability and versatility of this material and the brilliant colors of the glazes permitted great compositional freedom in the realization of bas-reliefs, balustrades, abstract designs covering entire walls, fountains and sculptures. Melchiorre Bega, Marco Zanuso and Luciano Baldessari collaborated on many occasions with ceramists and artists like Pietro Melandri, Lucio Fontana and Fausto Melotti: ceramics were perfect for introducing color and sculpture into buildings, in a synthesis of the arts that Gio Ponti was the first to advocate. In the years of Rationalism and the Novecento movement—currents that flourished between the thirties and fifties—the fruitful interaction between the arts, architecture and interior design produced spatial, decorative and formal results of the highest level, in part thanks to the financial resources of an upper middle-class that wanted to celebrate its prestige and its upward mobility through the decoration of its homes: an intentionally discreet, reserved representation, which found its perfect typological expression in hallways. 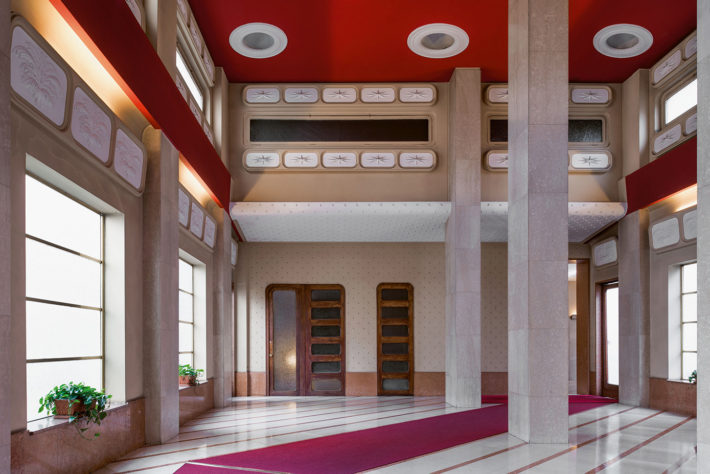 Entrances with a symmetrical layout—harking back more or less explicitly to the axial scheme with a grand staircase at the center of the Renaissance townhouse or the Palladian villa—were created by Muzio, Piero Portaluppi, Giuseppe Martinenghi and Giuseppe Terragni, among others. These were followed by the asymmetrical solutions often to be found in the designs of Gio Ponti, the BBPR, Asnago and Vender and Luigi Caccia Dominioni. The latter—who founded Azucena with Ignazio Gardella—would often make use of the company’s lamps in his curvilinear urban passageways: semipublic spaces furnished like apartments and frequently decorated by the artist Francesco Somaini, who created mosaic floorings with flamboyant patterns. Giulio Minoletti, in the apartment house on Corso di Porta Romana (at the Giardini d’Arcadia), designed an entrance stairway suspended above a pool of water that became an element of connection between the condominium and the large private garden. Terragni and Pietro Lingeri designed—in their famous Casa Rustici on Corso Sempione—a complex system that hinges on its entryway: stairs and ramps define the space, laid out symmetrically around the porter’s lodge, that separates the two lateral blocks of the condominium, unified on the façade by running balconies. Opposite, on the other side of Corso Sempione, we find Piero Bottoni’s INA highrise, inspired by Le Corbusier’s Unité d’Habitation, which has a longitudinal entryway with pillars of raw concrete and is decorated with abstract patterns—in pink and blue mosaic—that contrast with the austere appearance of the condominium’s exterior. 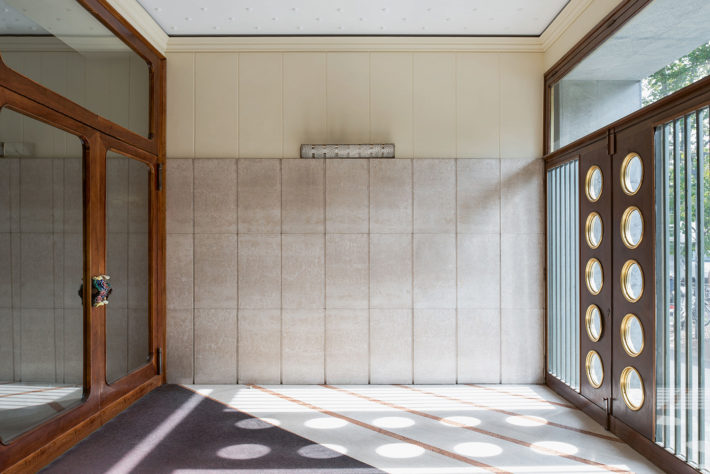 In the yellow hallway of Casa Melandri on Viale Lunigiana, Gio Ponti designed lozenge-shaped motifs on the walls and a staircase in which he experimented with the “diamond” shapes that were to characterize much of his architecture. At times the entryways extend to the outside, as in the hall of the BBPR’s Torre Velasca, which opens visually onto the square, in continuity with it, but also projects upward in perspective, with a controlled and precise wealth of detail: the steel candelabra lamps, the facing of mahogany segments in the elevator block, the pillars covered with pale gray mosaic, the granite flooring. On Piazza Sant’Erasmo the BBPR, once again, produced a piece of genuine set design: in a stunning promenade, the hallway of the condominium was turned into a “private museum” filled with statues and columns, theatrical wings and blades of light. The entryways of Milan—discreet geodes that only reveal their splendor on the inside—have above all been a fabulous opportunity for experimentation, a stylistic exercise that allowed architects, artists, designers and artisans to express, in the often cramped dimensions of a lobby, the spirit of the time over the course of several decades of the 20th century. 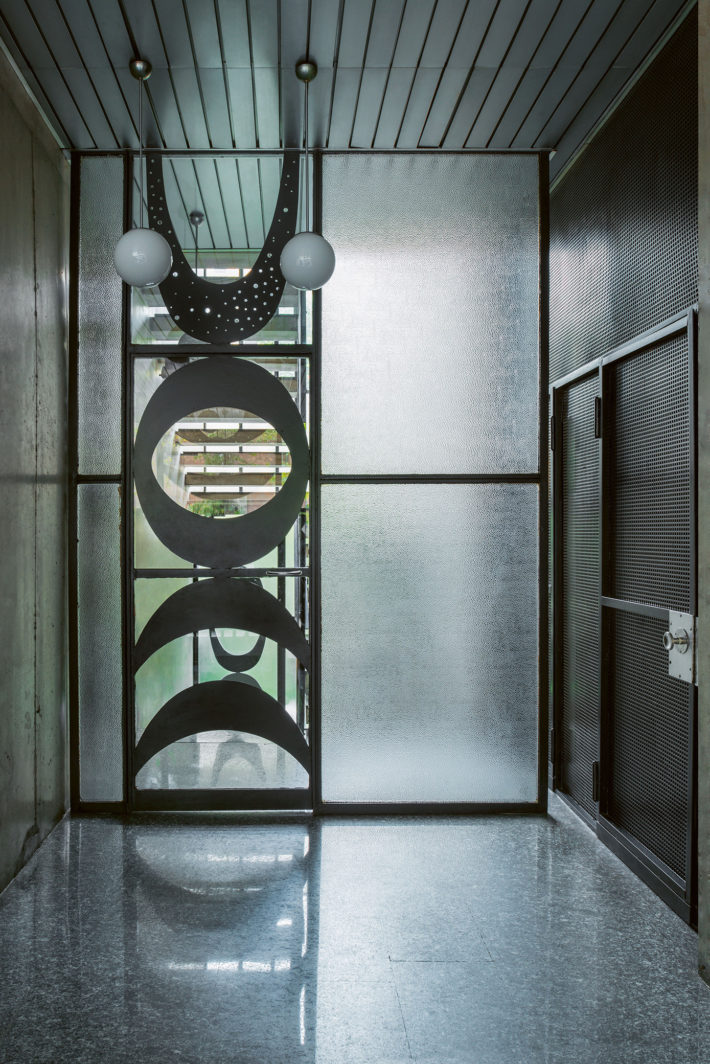 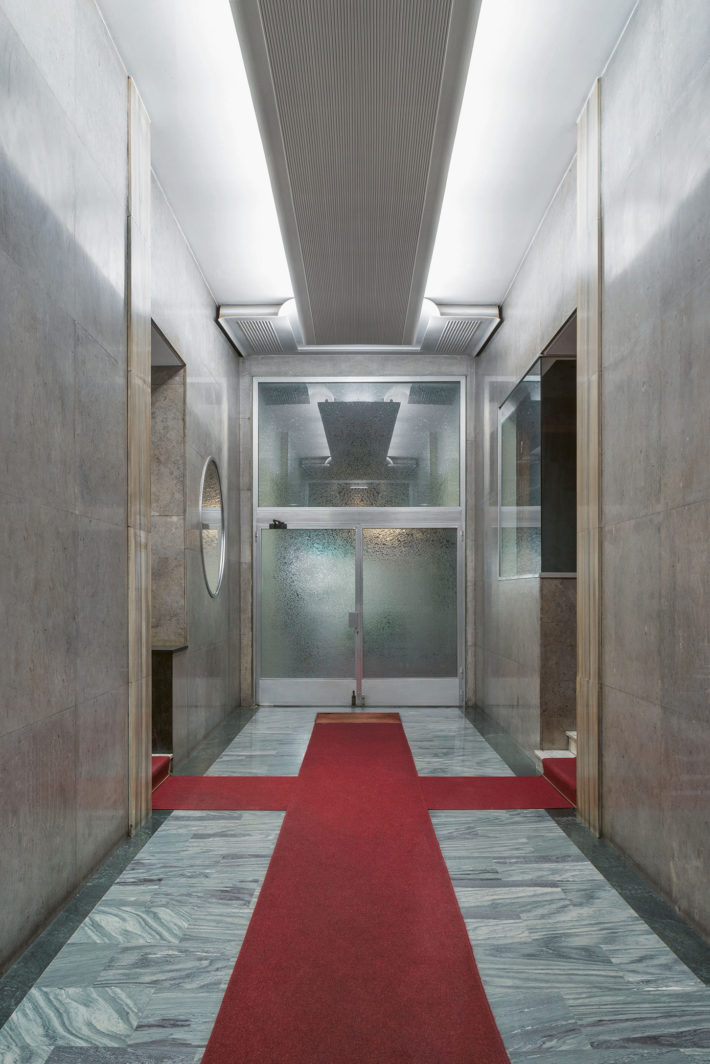 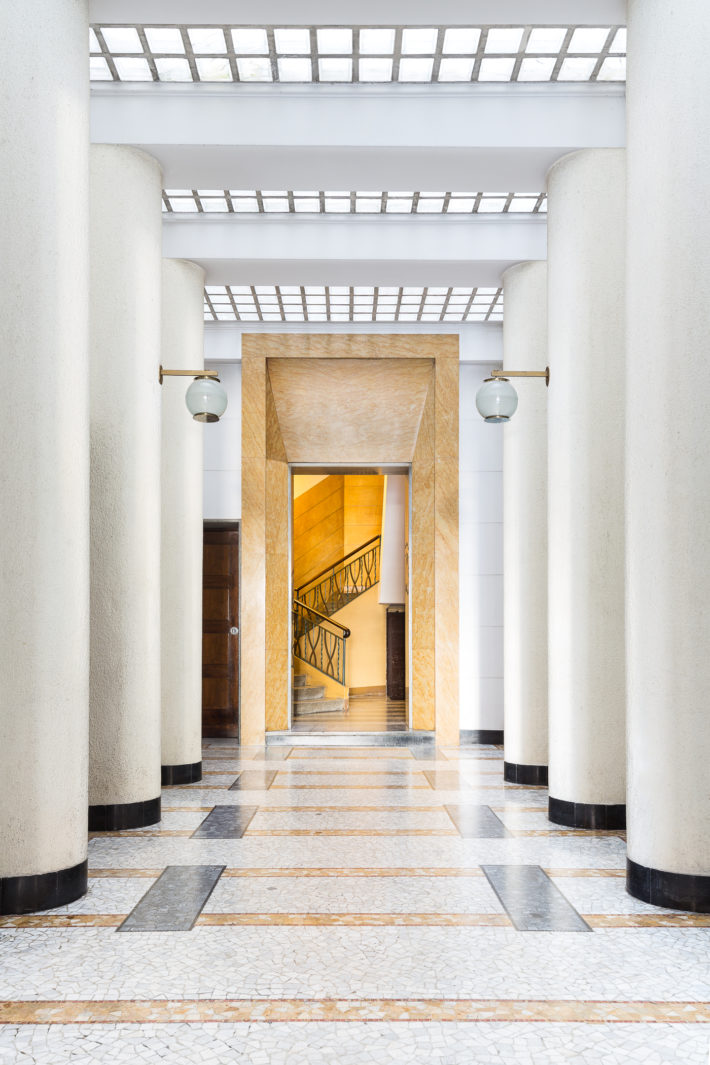 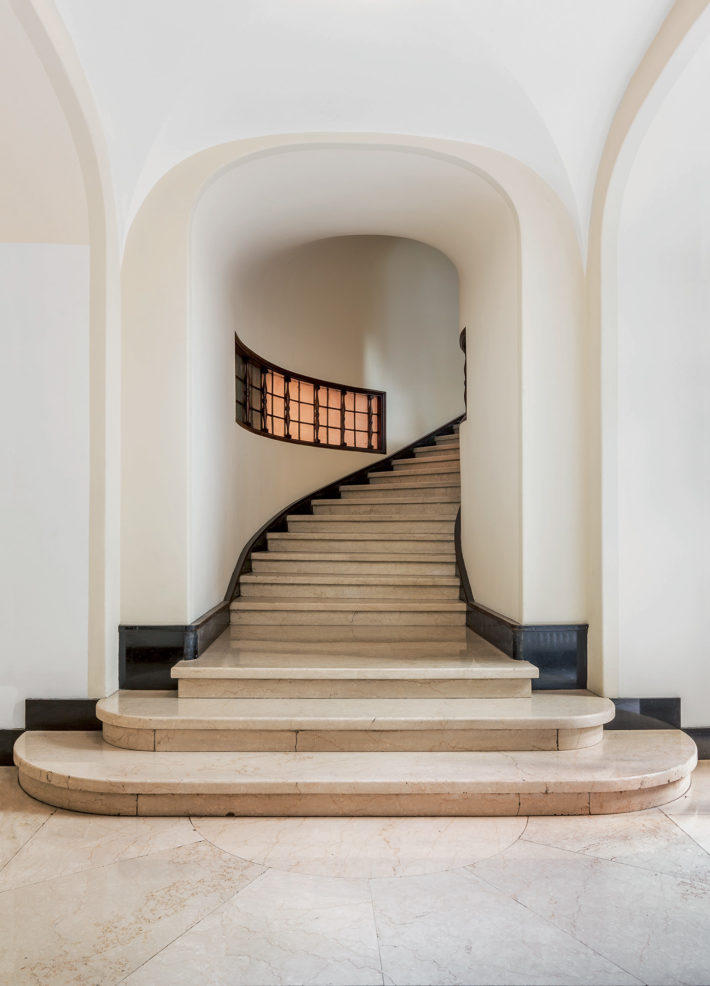 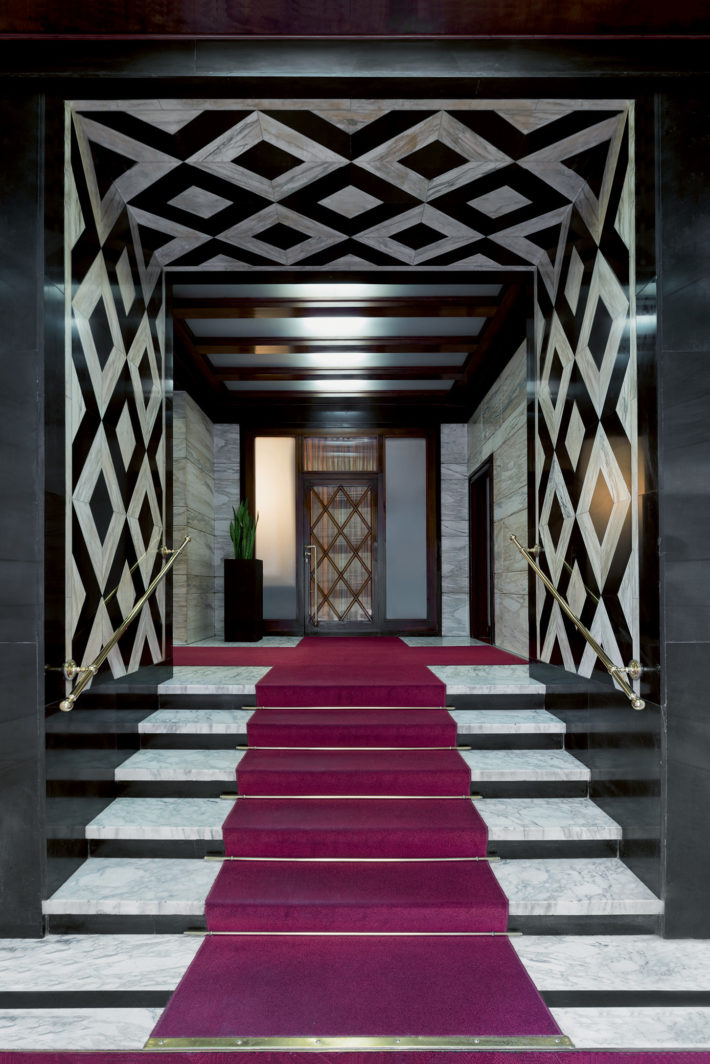 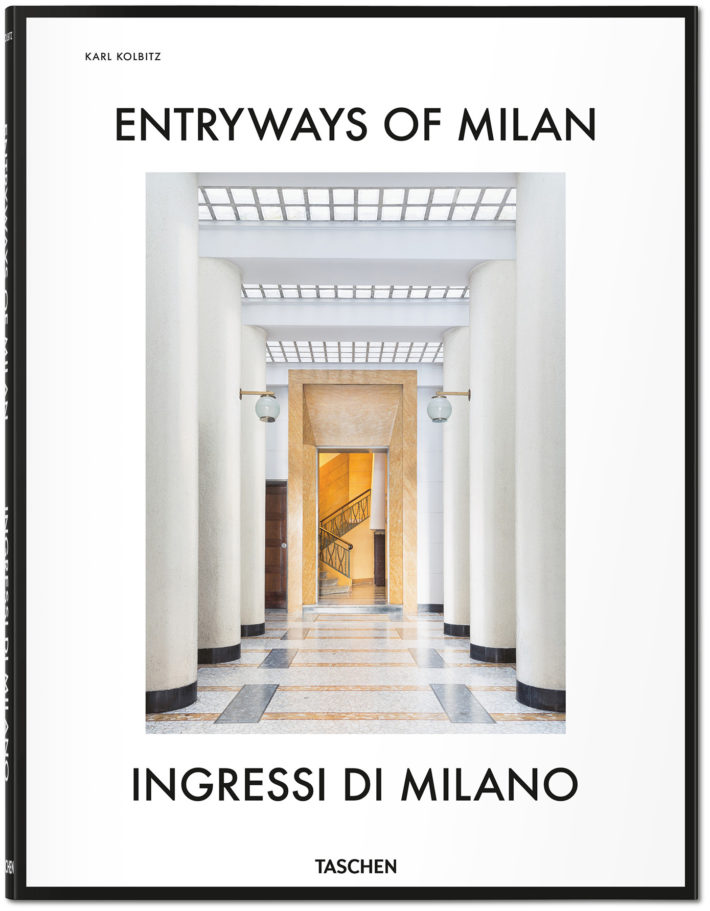