Workers move a steam locomotive at the railway yard in Agra, near Taj Mahal, Pradesh, India, 1983 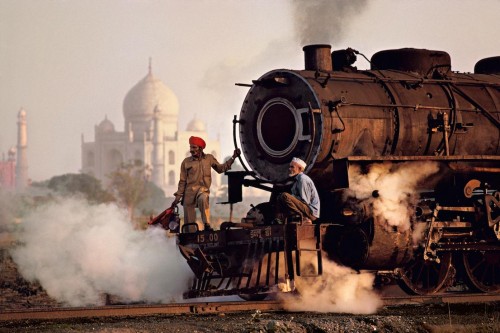 NYC5903, MCS1983002 K201
“Trying to tell India’s story in pictures, I spent time in it’s stations, watching the swirl of life each time a train pulls in. People endlessly wait, they camp out in the stations, good and services are exchanged. Cha-wallahs ply the carriages with their wares. Cows and monkeys forage for food. The entrance halls reverberate as passengers compete for tickets-the clamor of crowds is a constant assault on the senses. I was working an magazine assignment on a train journey across South Asia and by chance was walking down the track from Agra Fort Station. I was amazed to see the Taj in back of this enormous rail yard so I waited and suddenly they started moving these steam locomotives in front of the Taj. India’s stations are a microcosm of the country beyond. Here in the commotion of travel, you can feel the continuity between past and present.”

“This photograph recorded in 1983 the contrast between a mighty technology – the steam locomotive – and the transcendent aesthetic of the Taj Mahal, with its light-reflecting surface. The steam engine, once an important symbol of indian national culture, is now a thing of the past. So in addition to staging a powerful rhetoric, McCurry’s photograph captures a lost moment in culture. Even the tracks near the Taj Mahal have now been removed. The character of McCurry’s work, then, lies in the power of its record and its rhetoric. The photograph of engine set against architectural spender holds fast an idea – a way of thinking about contrast and culture that can be carried forward to other images in other times.”