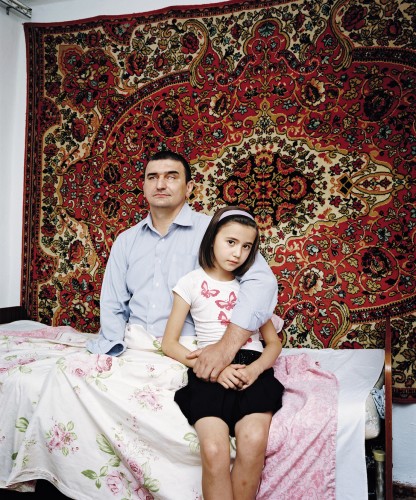 Karabulak, RUSSIA, 2012 – Hamzad Ivloev (44) was a policeman in Karabulak. At night he guarded a checkpoint. That was until they were attacked by the rebels ‚Äòfrom the woods‚Äô, the armed groups determined to establish an Islamic emirate in the North Caucasus. Together with his friend and colleague, he was able to chase the rebels away, but on his return to the checkpoint he discovered a booby trap: a grenade had been lodged in a glass in such a way that the slightest movement would have set it off. At that moment reinforcements arrived. Hamzad started screaming and telling them to run away. But no one responded. He decided to throw himself on the grenade.

Hamzad is now bedridden. He has lost his legs, his right arm and his sight. His mind is as sharp as it always was, however. ‚ÄúI listen to the radio and talk to my children,‚Äù he says. But mostly he goes over and over that fatal night. ‚ÄúIf my colleagues had just responded, but they didn‚Äôt do anything. In retrospect, it was all for nothing. I sacrificed myself for a bunch of cowards,‚Äù he says bitterly.