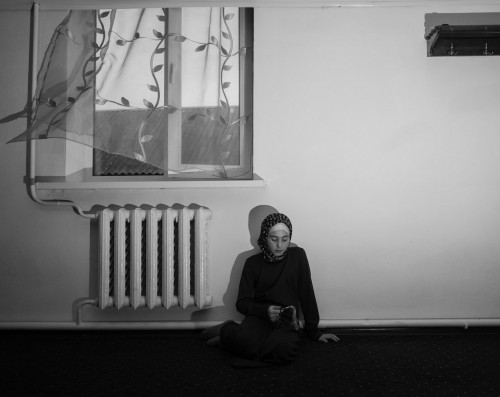 Republic of Chechnya, Russia, 03/2013. A girl praying in the only official female madrasa in Chechnya and in Russia. This is one of the oldest madrasas, where girls and women can study Muslim religion. It has been operational for the past 13 years, and in the past, before Ramzan Kadyrov’s full approval, the school was burned down by Russian Federal Authorities. Thanks to Aiman Kadyrova, President of the Regional Public Foundation named after Akhmat-Khadji Kadyrov, the madrasa now has its own building, equipped with everything that is necessary for training. A resident of the village declares: “I remember the time when President Djokhar Dudaev claimed that our girls needed not schools, but madrasas, and that statement caused a wave of indignation in the Republic. Djokhar Dudaev was criticized everywhere and by everyone. People said that he did not want our children to get good education, that the rights of women were being violated, and so on. Today, for some reason, no one protests against women’s madrasas, against mandatory wearing of headscarves for young women, or against the introduction of some elements of Sharia law. On the contrary, all people thank the government, and personally Ramzan Kadyrov for that. That is, the outlook on life has so dramatically changed in the past twenty years in our Republic”. Chiri Yurt.