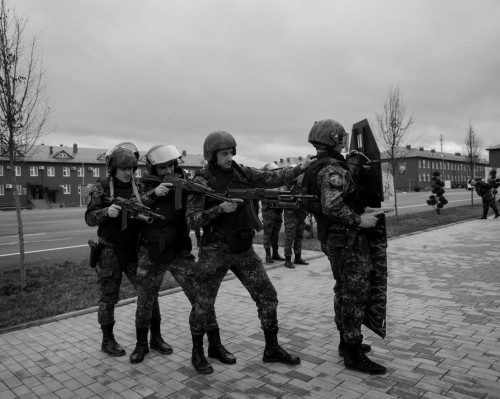 Republic of Chechnya, Russia, 03/2013. The special forces of the “Batallion Sever” (North Battalion), training for security operations. The “Kadyrovtsy”, thousands of armed men devoted to the Kadyrov clan, including many former rebels from the First and Second Chechen Campaigns, were initially created as a personal security guard of Akhmad Kadyrov, despite at the time he had no formal legal status. After Akhmad Kadyrov was killed, the Security Service was formally liquidated and most of its units integrated into the system of the Ministry of the Interior of Chechnya. Two units were created: the “Akhmad Kadyrov” Second Road Patrol Regiment of the Police and the Oil Regiment, later renamed “Battalion North” and “Battalion South”. As of 2008, Ramzan Kadyrov controls all of the Chechen forces, and has placed former commanders of his militia in the most important positions in the government. The two Security Units are involved in so-called “anti-terrorist operations”, and according to several organizations, they have often violated human rights. Grozny.