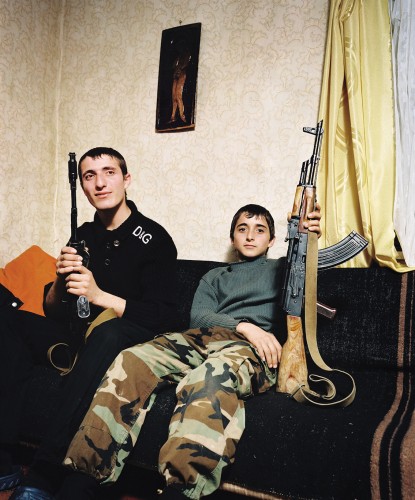 Kuabchara, ABKHAZIA, 2009 – Brothers Zashrikwa (17) and Edrese (14) pose proudly with a Kalashnikov on the sofa in their aunt and uncle’s house. They live in the Kodori Valley, a remote mountainous region on the border between Abkhazia and Georgia. In August 2008, Abkhazia gained control of the officially demilitarised Kodori Valley. The valley’s 2,000 Georgian inhabitants fled over the border. A few families refused to be driven out: ‘We are mountain people. Borders don’t mean very much to us. But if I had to choose between a Georgian and an Abkhazian passport, I would choose a Georgian one.’
© ROB HORNSTRA/+31 6 14365936